I’m delighted to have a guest post today from the lovely French blogger Anne who blogs at chicandgeek.com. She has agreed to share some of her wonderful family wedding photos from the 20s through to the 70s. Enjoy, and merci Anne!

The pictures I’m happy to share with you today came in my mailbox (the real one) in a huge envelope. This was a surprise from my mum… As I opened it, a smile of nostalgia appeared on my lips and I was suddenly seven years old again.

When I was a little girl, I secretly dreamt to marry my dad, as we all do (says Freud). But most of all, I wanted to be a bride.

In English, you have too different words, but in French, wedding and marriage have one only translation : mariage. It’s often said (by men) that women mistake the wedding for the marriage. I did so…

I went in the attics to fantasize looking through old LIFE Magazines which belonged to my late grandma. I wanted to be part of the High Society (can hear Louis Armstrong in my head and see Grace Kelly), to be a Kennedy !!!

Or a Hollywood actress like Elizabeth Taylor, with a sexy lover and a lot of diamonds.

But we lived in the countryside, in France. My two sisters and me were 3 little girls from Little Rock (of course this is not actually the name of our village in the Limousin ;))

One of our favorite pastimes was to put a chair up on the table and climb up to open the secret drawer in a high cupboard in our living room.
One of us took all the pictures she could reach and pass them to the others. They were all wedding pictures: family and friends, dated from the 20’s to the 70’s.

Then we sat on the oriental carpet and spread out all of them around us, searching for the most beautiful bride.

The ones I like today are not the same I adored then. Taste in fashion is very different between a child and an adult.

These were small humble weddings. The photos have gone yellow with age. But they were memories of the family, of the village itself, and we worshiped them.

Let have a look… 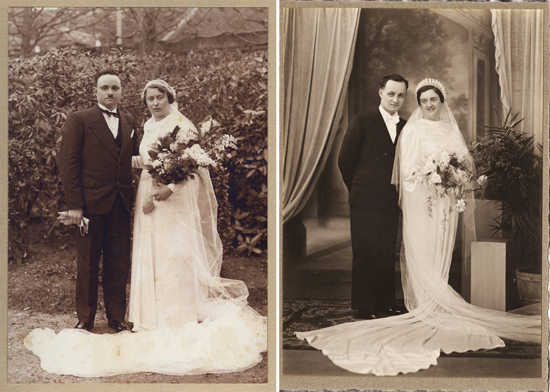 Then the roaring twenties brides, love them

Should I marry now, I would love to look like this one, with her tiara and tulle veil. 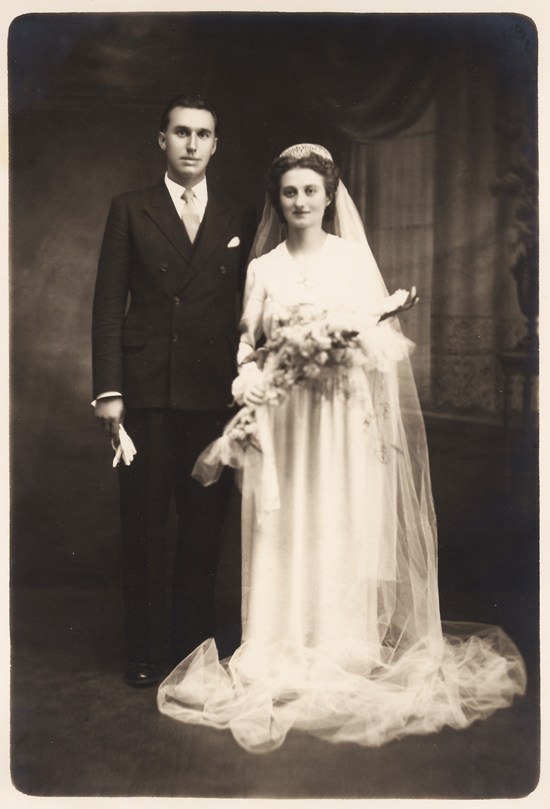 The next ones are from the 50’s I think. The style is different, with slim waists and voluminous skirts. White flowers everywhere…

Grooms have not changed so much. Black suit and gloves (Why don’t they wear gloves anymore ? And hats ? It’s a pity…).

But I found one who is different, Coco Chanel inspired… We called him the “Matelot”. 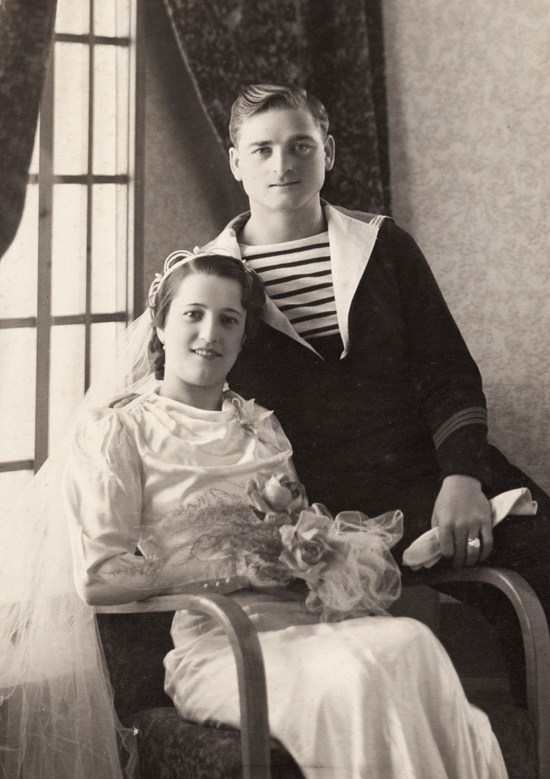 This could have been an ad for Jean-Paul Gaultier 😉

And now, let’s move forward to the early seventies, with classic ones but also most extravagant : newly weds posing in the country, playing with each other, much less melodramatic.

The pictures were taken in public gardens… 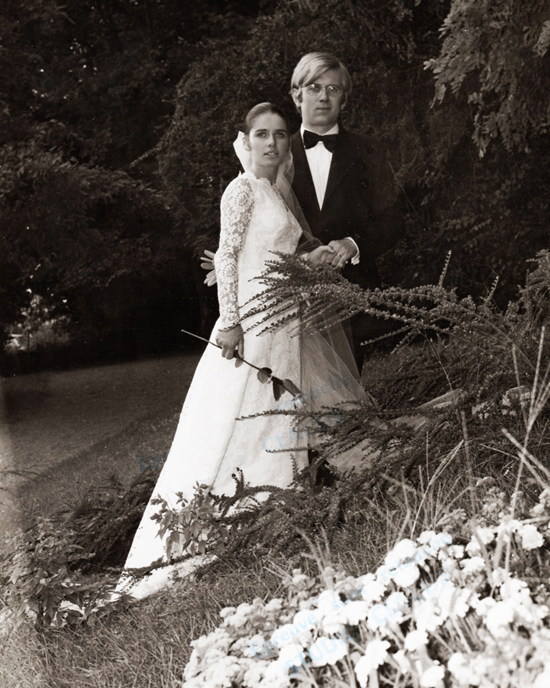 But still in black and white. Because it was the tradition. And you sent one to each guest as a thank you card, a souvenir. That’s why I have so many : my grand-father was the doctor in the village so he knew everybody and had a lot of invitations 😉

The character I preferred in the global story was the Father of the Bride… because of the movie with Elizabeth Taylor and Spencer Tracy.

I was not sure to find a groom worth of it, but I already had the perfect guy to walk me down the aisle. He looked a bit like Spencer Tracy by the time I finally get married and he did a memorable speech…

One other tradition I wanted to follow was the group photo !

I spent so much time looking at those ones, searching the tiny heads of people I knew. 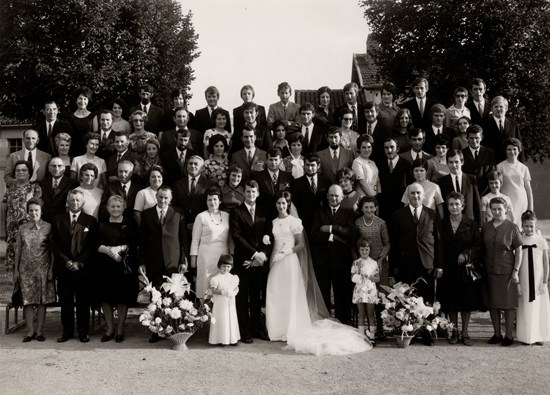 As a conclusion, I will show you one bride I had forgotten. 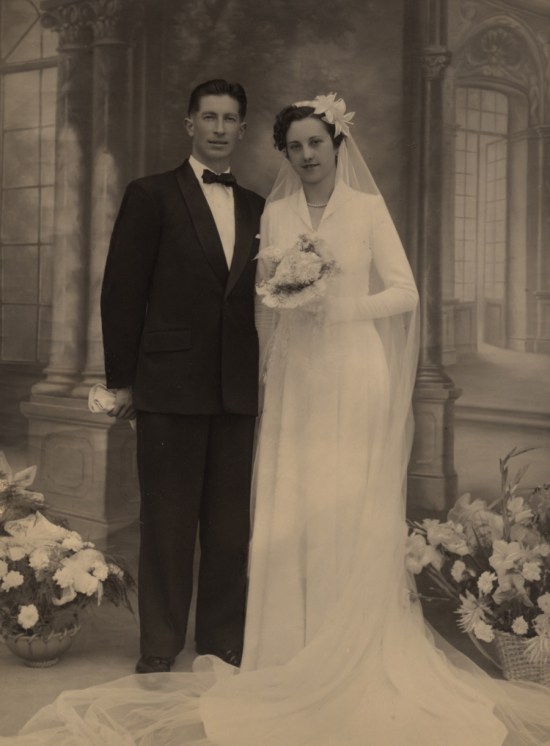 And the group photo of the same wedding, taken in front of the bar, nearby the church.
There was always a bar next to the church in France… and I bet this one has seen many many weddings !) 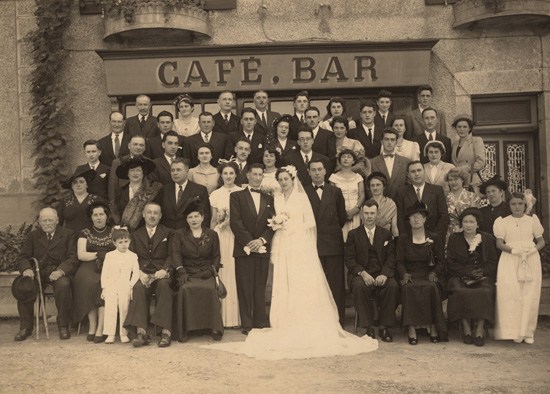 Here were the dreams of three little girls.

I’m moved because all those people above, or their children, grand-children, nieces etc. were part of my own wedding, ten years ago, in the same region.

Hope you enjoyed the trip down Memory Lane and thank you Mary to have welcome a French girl on your wonderful website !

You can find out more about Anne at her blog chicandgeek.com. If you would be interested in writing a guest post for We Heart Vintage let me know!