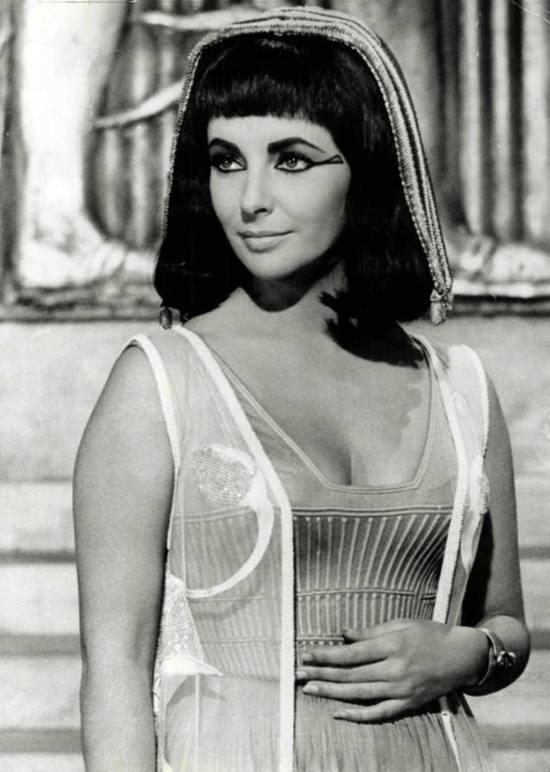 When Elizabeth Taylor came to the end of her studio contract in 1961 she was free to finally choose her roles and command her own price. And that’s exactly what she did when she demanded the huge sum of $1 million to play the title role in Cleopatra.

Cleopatra started as a small budget-movie which was to be filmed in London, however the movie swiftly ran from one calamity to another.

Within weeks of starting filming Taylor fell dangerously ill with double pneumonia, which left her needing an emergency tracheotomy. With some of the newspapers already reporting Taylor’s death Joan Collins was called to be on standby to take over the title role, but wasn’t needed in the end. I think Joan Collins would have made rather a magnificent Cleopatra, but probably not as much as Taylor.

When Taylor recovered from her illness the location was transferred to Rome, to aid her recovery away from the London weather.

The studio was left with a tough decision at this point. One director had already quit, and the movie was already seriously over budget (around $5m).  Something needed to change.

The question was whether to replace Taylor, who was proving to be a bit of a liability and Joan Collins and Marilyn Monroe were discussed as possible replacements. In the end they got rid of Peter Finch and Stephen Boyd who were originally cast as Anthony and Caesar and replaced them with the now famous combination of Richard Burton and Rex Harrison.

When flying out to Rome, Taylor admitted she was dreading working with Burton, who was a notorious womanizer, and was determined she wouldn’t end up another notch on his bed post.

Within weeks of meeting however, their legendary affair was underway to the outrage of the rest of the world.

Taylor had only recently recovered from some seriously bad press after husband No 2, Mike Todd, was killed in a plane crash and she sought solace in the arms of his best friend, singer Eddie Fisher (husband no. 3).

The press and American public were outraged because Fisher was married to American sweetheart Debbie Reynolds and Taylor was branded a harlot and a homewrecker.

It was only public sympathy because of her near-death experience and tracheotomy which helped her weather that storm. She even won the Oscar that year for Butterfield 8. Shirley MacLaine later said she lost her Oscar to a tracheotomy.

Taylor and Burton were hounded by the press until they finally manged to snap incriminating photos of the couple together on a yacht 1962.

When the story broke it was known as ‘le scandale’. The world was outraged and fascinated. Even the pope weighed in and condemned Taylor’s moral vagrancy.

Buckling under press pressure Burton broke off the relationship and returned to his wife, until Taylor took an overdose and he returned to her side for good.

Their relationship was filled with passion, fuelled with excessive drinking and peppered with frequent violent rows which Taylor described as ‘one of the greatest exercises in marital togetherness’.

They married when Cleopatra wrapped in 1964 and neither of them attended the movie premiere. They had created enough of a publicity buzz for it to become an instant hit.

It the most successful movie of the year but it still made a loss after going over budget by a staggering $42 million. It still stands as the most expensive movie of all time.

Image source and copyright: This work is in the public domain in that it was published in the United States between 1923 and 1977 and without a copyright notice.