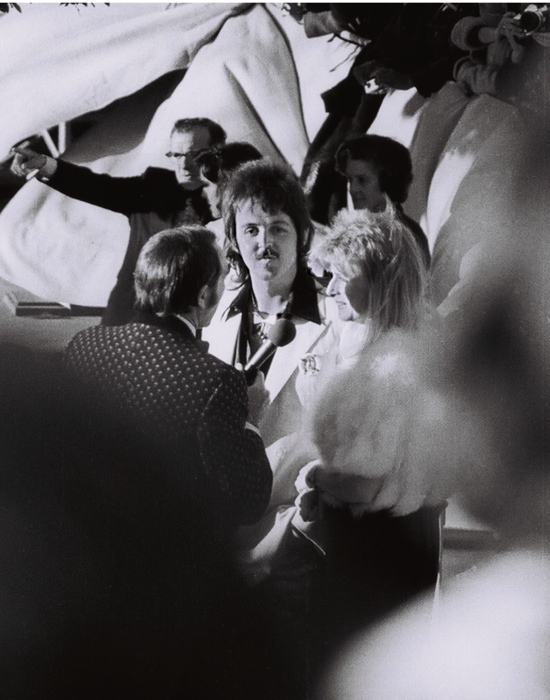 Wow, what hairstyles! I can’t imagine the mullet ever looked good, even on the rich and beautiful! The person who took this photo has a really interesting story to go with it which I thought you might like:

I took this Picture of Paul & Linda McCartney at the 1973 Academy Awards (which were presented April 2, 1974 at the Dorothy Chandler Pavilion in Los Angeles) when Paul was nominated for “Live & Let Die.” Paul & Linda walked up to the podium and Army Archerd started asking him questions on live TV. Paul then turned his head and stared directly at me, totally ignoring the interviewer, and giving me an eerie feeling – was he actually looking at me? I pulled the viewfinder of the camera away from my eye, I had no more film, having just taken this last frame of Paul & Linda, but he continued his penetrating stare.

I was getting nervous, here was my idol, staring at me! Army valiantly kept asking questions of Paul, who continued his unblinking stare, keeping perfectly silent. Finally Linda would answer the question. This went on for five or six questions. Finally, Army dejectedly said “Well, thanks Paul” to which Paul suddenly turned to Army shaking his hand saying “Thank You, Army, great questions, you’re the best, always love talking to you.” Then he and Linda walked over near me and deliberatly turned their backs to me just as they got close, sidestepping in front of me. I guess Paul was feeling playful and decided to give a young man a thrill, it worked! April 1974

Source and copyright: This file is licensed under the Creative Commons Attribution-Share Alike 3.0 Unported license.