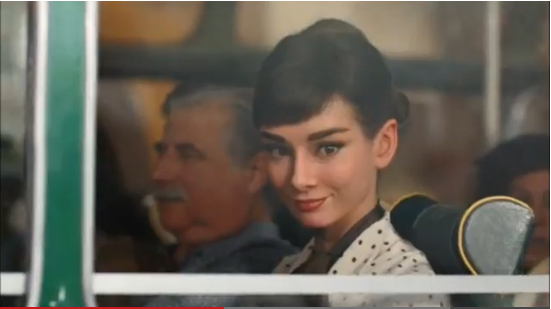 Have you seen the new Audrey Hepburn advert for Galaxy chocolate? I think it’s only being aired in the UK, so I thought I’d share it here for everyone who hasn’t seen it yet.  It came out about a month ago and I’m not really sure what to think of it.  Audrey Hepburn has been brought back to life using the magic CGI to create a completely new mini-movie of Audrey on the Amalfi Coast (that’s Italy – although I’m sure you knew that already) in the 1950s.

It’s certainly fascinating and rather enchanting to see some new Audrey Hepburn footage, even if it isn’t real, but I find it disquieting to see long-dead stars being used to sell stuff (a bit like Marilyn Monroe and that shoe collection).

Hepburn’s sons, Sean Ferrer and Luca Dotti don’t have any of these qualms though. They have been quoted as saying “Our mother often spoke about her love of chocolate and how it lifted her spirit so we’re sure she would have been proud of her role as the face of Galaxy. The advert perfectly captures her playful spirit and we hope audiences enjoy it as much as they enjoyed her movies.”

What do you think?