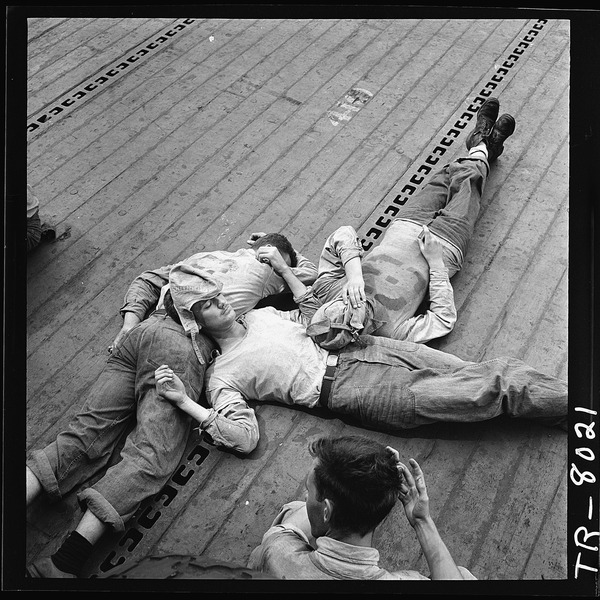 Edward Steichen is best known (at least to me) as being one of the main photographers for Vogue and Vanity Fair during the late 1920s and 1930s. He made a name for himself as a war photographer during World War 1 and between the wars became one of the best paid and well-known fashion photographers. In World War 2 he served as Director of the Naval Aviation Photographic Unit and these are some of the photographs he took whilst onboard the USS Lexington in 1943.

The photos are a fascinating insight into life onboard a naval ship during WW2 but also almost look like movie stills because the photography is so beautiful. 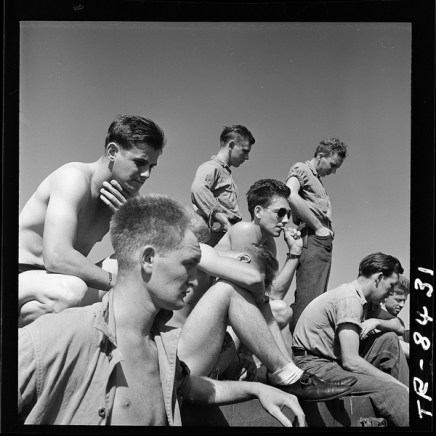 Crewmen gather around loud-speaker and listen intently as pilots relate story of attack on Japs at Kwajalein. 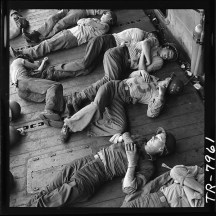 Enlisted men, exhausted after more than 24 hours at general quarters, sleep in tangled patterns aboard the USS Lexington (CV-16). 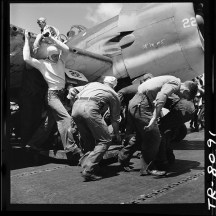 Crewmen hastily drag plane with flat tire down flight deck of USS Lexington (CV-16) to make way for next plane to land.

Sailors sleeping on flight deck of the USS Lexington

Pilots at briefing session aboard USS Lexington (CV-16) prior to attack on Kwajalein.

Enlisted men reading on edge of elevator aboard USS Lexington

This work is in the public domain in the United States because it is a work prepared by an officer or employee of the United States Government as part of that person’s official duties under the terms of Title 17, Chapter 1, Section 105 of the US Code.