Helene Fallows has owned Revival in Huddersfield for almost 11 years. She sells vintage clothing and accessories at her store in a beautiful Victorian arcade in the town centre and her online store at www.revivalvintage.co.uk.

Helene is married to Mark who owns a fancy dress costume shop and has two daughters Florence and Molly. I asked her to jot down the events of her week to give us a snapshot of what it’s like to own and run a vintage clothing store. 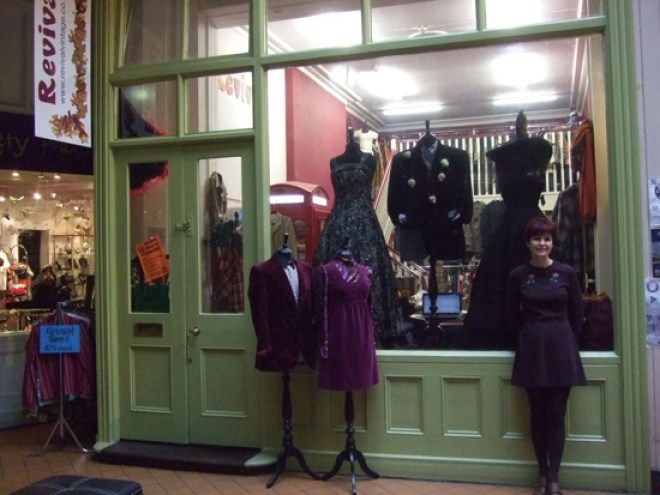 Up at 6am to set off for a buying trip.  I have one main vintage wholesalers I use and I go once a month to hand pick things for the shop and website.

I’m the first one there, I am drawn to a rail of hanging dresses and start to sift through them.  I select a few and then make my way to an area with about twelve tables piled high with stock.  Meanwhile one or two others start to arrive and the pressure is on.

Suddenly everything I notice other people holding up to the light seem more attractive than the cream Aron jumper I’m checking over.  ‘I would have had that I think to myself as a women in a puffa jacket eyes up a dropped waist dress, wait she’s put it back!’  I drop the sweater like a hot potato and dart over to find it has stains like a map of Asia all down the front.  Damn it, I’m wasting time.

After about an hour and a half’s rummaging my husband Mark taps his watch and tells me we need to get back to Huddersfield to open the shops.
Our selection is weighed and we pay up.

I finally open up ten minutes late, but it’s not a problem, there are rarely people pacing up and down, eager to get in…especially not on a Monday.
My favourite part of any buying trip is sifting through my booty and sorting it into three piles, 1 straight out, 2 hang for pressing and 3 yeuk needs a wash.

The rest of the day is fairly uneventful but at least it gave me time to catch up with emails, comment on a few blogs and try on three jumpers, a kilt and a coat. 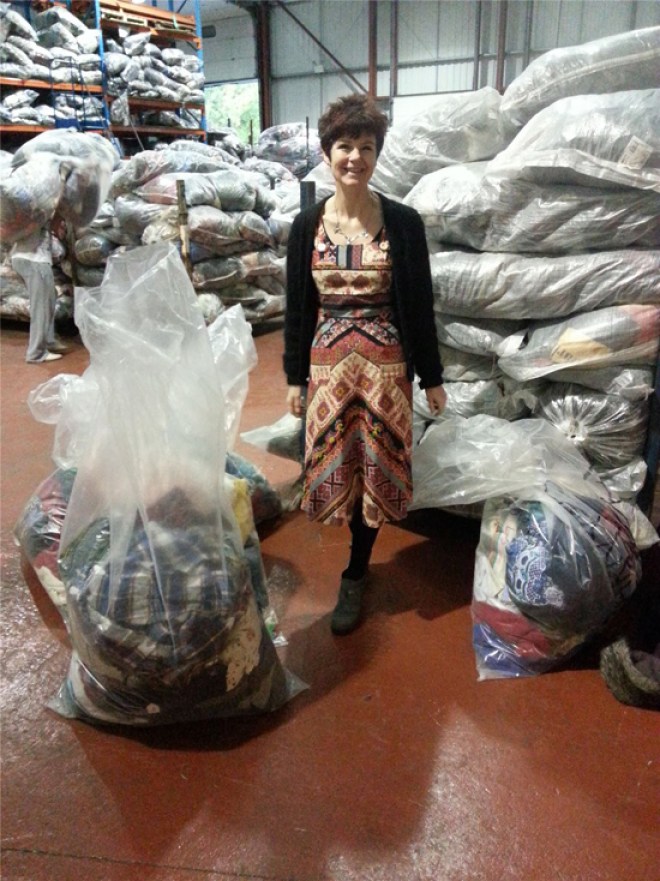 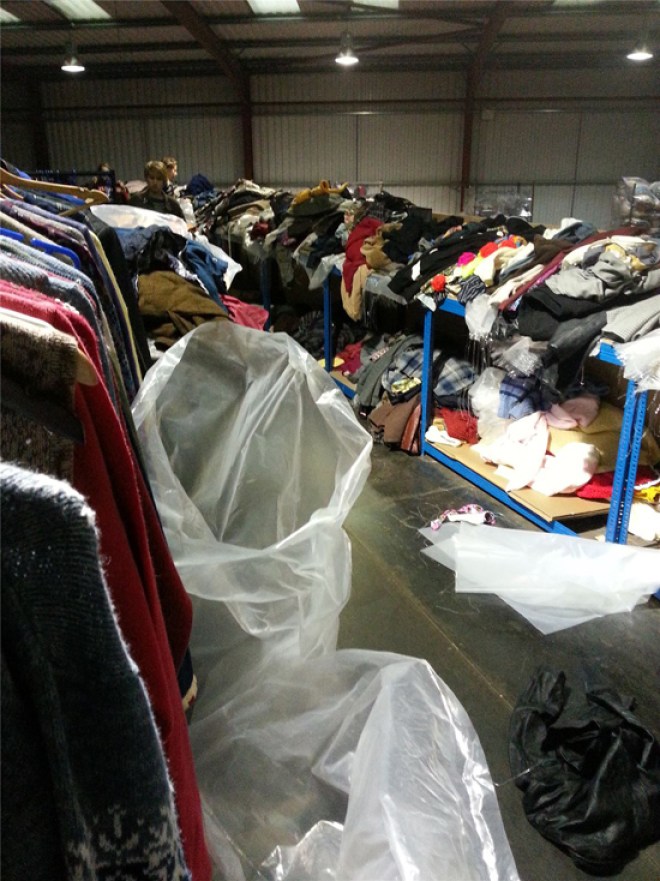 My morning started well.  A lovely young lady came in with her mum and tried on a 1950s tape lace detail gown I had displayed in my Halloween themed window.  She tried it on, loved it, fit her perfectly.  Her mum agreed to treat her as it was for her eighteenth birthday party.

Has to be one of the best starts to the day I’ve had in a long time.  Sadly things did not continue that way, only had a couple of small purchases during the rest of the day.  There’s always tomorrow.

An Irish lady called in with several bags of clothing a friend had given her to see if any were of interest to me.  Out of it all I bought only one dress and a brooch.  Unfortunately the majority were plain high neck crimplene numbers, I could have given her ten of those myself, gathering dust in the back.  I’m not against crimplene or maxis for that matter but they have to have a bit of spark about them even if it’s just a good print.

Hung a banner at the front of the arcade to advertise a Halloween fair we have organised.  Apple bobbing, fancy dress, stalls etc.  It’s nice to do something for the kids in half term week but my main motive is to drive more traffic to the splendid Byram Arcade which is full of small independent retailers like myself

Stayed at the office until 9pm as my youngest daughter Molly had a school awards presentation at the Town Hall, didn’t seem worth driving home to come back a couple of hours later.

It was for the senior pupils at her school but they are all encouraged to attend to offer support.  She didn’t seem too impressed when my Mark walked her round there in the rain at 6.30. 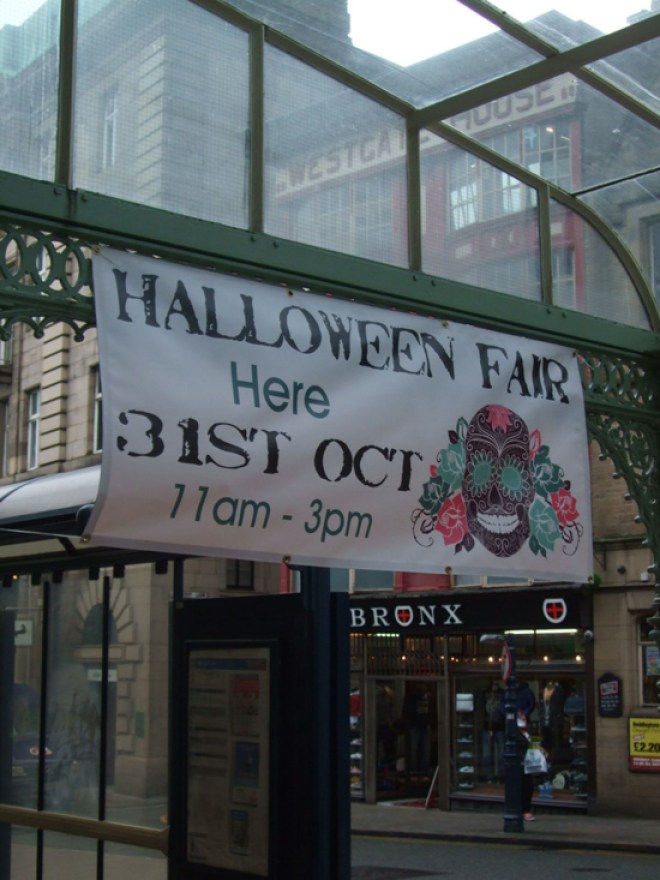 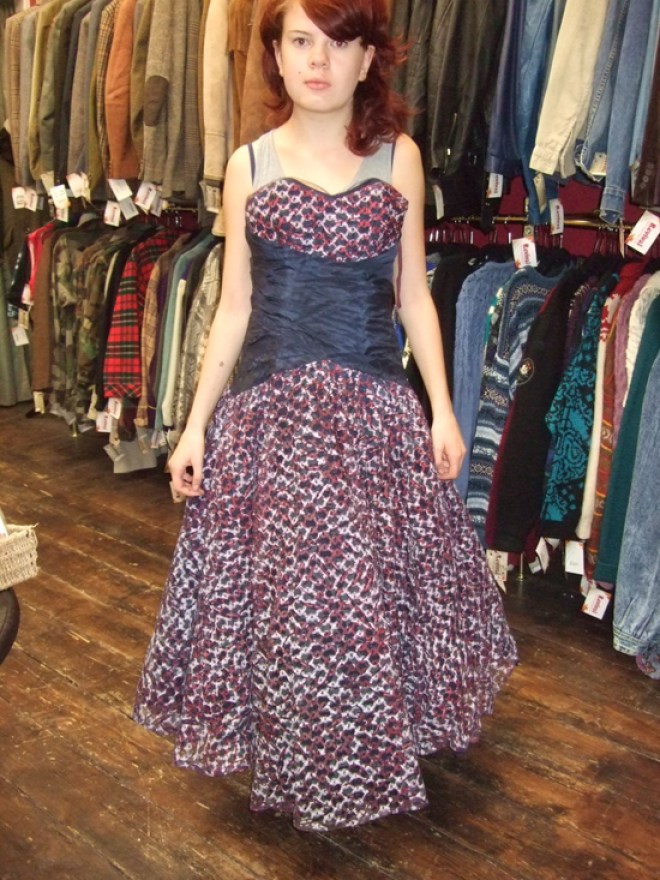 I recently took on a part time member of staff to help me with all the admin, web marketing, social media side of the business.  Well this morning I had pencilled in a progress review.  Laura and I chatted through her strengths and weaknesses then agreed some action points to
encourage her to the next level of her job.  She’s kind of creating her own role really as her job has evolved rather than resulted from a vacancy.
Afterwards we both opened up at the shop and started to put together a rail of clothing ready for our photo shoot at 2pm.

As well as new clothing to the store I wanted to replace some existing web pictures I wasn’t too happy with.

When our first time model Rebecca arrived  we chose a location inside the arcade as it makes the changes so much quicker.
The shoot went well. Becca was a charming model.  We were mostly taking pictures of our winter coat collection.

Caught up on a few emails after tea, not before Mark my husband walked into the en suite and caught me taking a shower at the same time ‘hosing’ down a pink polka dot 1950s dress!  I’m not proud but I’ve ruined far too many in our Hotpoint.  Worst of it is he didn’t bat an eye lid, too used to his wife’s bonkers ways. 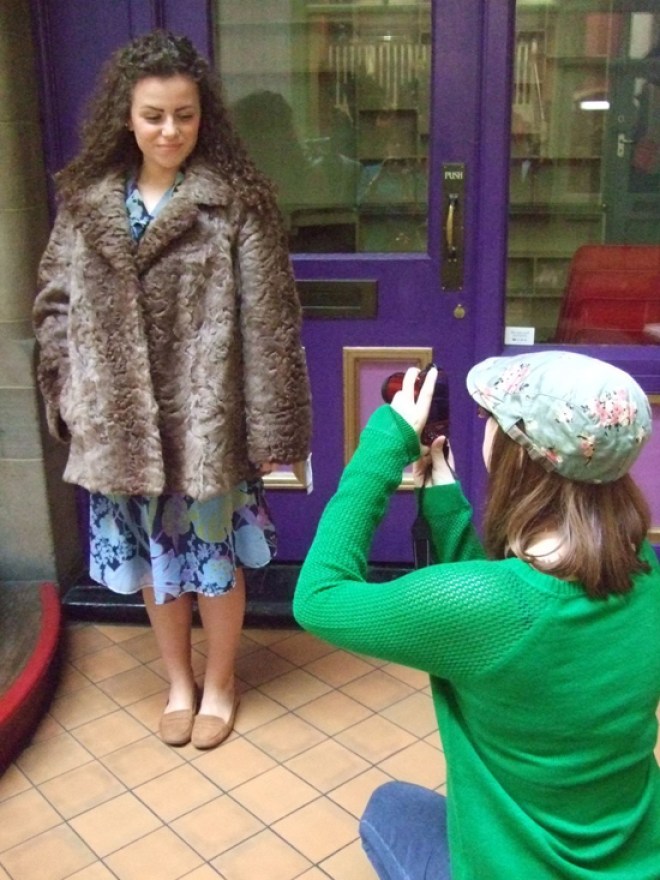 Model and photographer hard at work 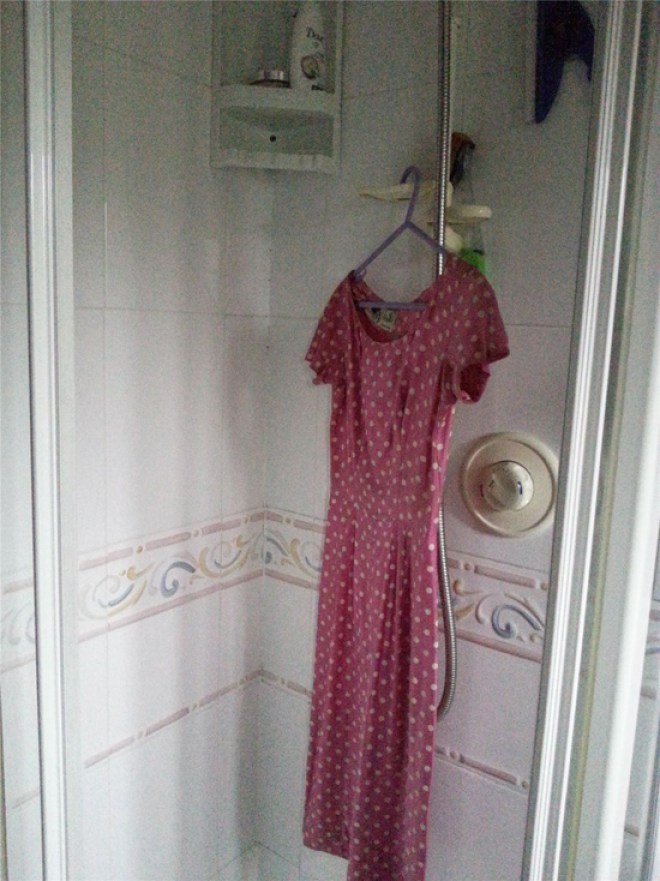 The 1950s dress taking a shower

The Halloween banner I hung up on Tuesday with another shop owner Hardy has been stolen from the front of the building.  Gutted, the sugar skull image I used has obviously proved too tempting for some late night chancers.  What a waste of time and tenants fund money.

Need to start putting the clothing we photographed at the shoot on the website today.  It’s a long job.  Pictures have to be re-sized, uploaded to the database, there are four views per item. Also they have to be described thoroughly using original text, measured and assigned their different categories such as women’s, coats, 1960s etc.  Barcodes are then printed and stuck on to the hanging tags.  Ten minutes later someone could buy one of the things and the work would all be for nothing.  Can be frustrating.

Someone from Boots is calling in today to ask about loaning clothes from each decade for a cosmetics promotion.

Quiet day sales wise.  Elisa my neighbour from the craft and gift store said she had a poor day too.

Mark and I go to dancing lessons on a Thursday evening, 7pm so we go straight from work, good to have some time away from our laptops.

We concentrated on Mambo, swing jive and an Argentine waltz.  I got really warm but couldn’t discard my cardi as the 1970s dress I was wearing had started to split at the side seam earlier in the day.  After a late dinner we watched a couple of episodes of US sitcom called Frasier before retiring exhausted as usual. 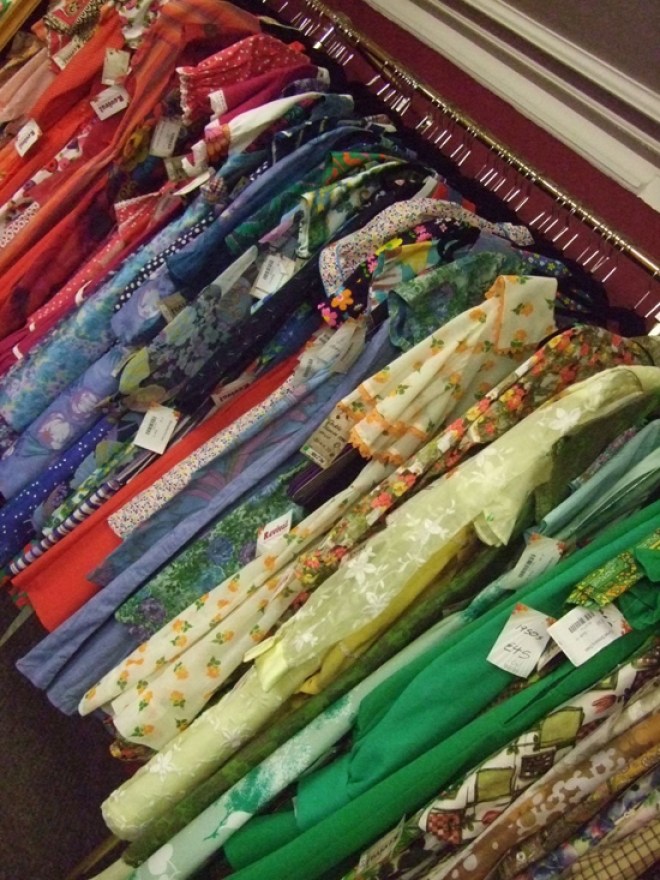 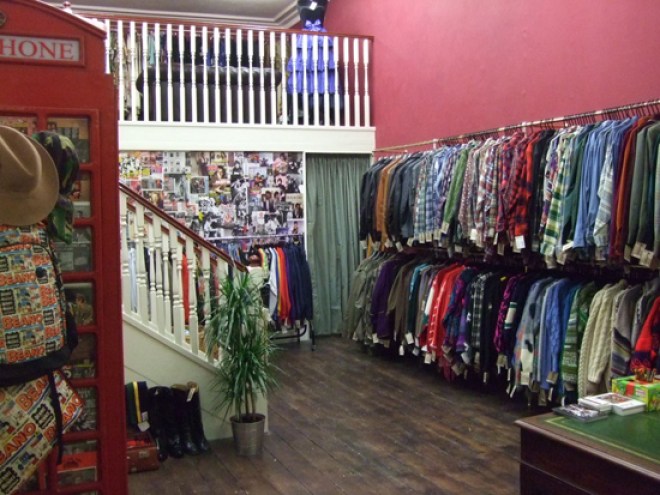 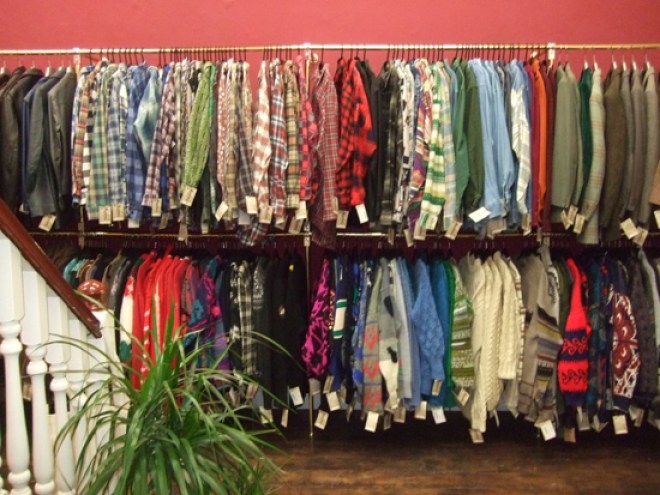 Had a busy day, sold all sorts of bits and pieces including a scarf,a 1970s shirt, a 1980s bold printed silk blouson jacket and the rest minus deposit on a black leather biker jacket.

I took delivery of some hand knitted stripe beanie hats in great colour combinations and over sized pompoms.  The first lot of dresses I selected at the London Edge trade show also arrived along with some sweet 1940s style wool felt hats.
My younger daughter has already earmarked a beanie.  She promises to put it on Instagram if I do her a good discount!

Towards the end of the day some of the items I listed on ebay ten days ago had completed their auctions.  Two items had not sold the third a beautiful Jean Varon 1970s dress sold for #12.50.  Why do I succumb to the allure of a quick fix ebay sale when things are slow at the shop? Nearly always results in disappointment.  Will I ever learn? 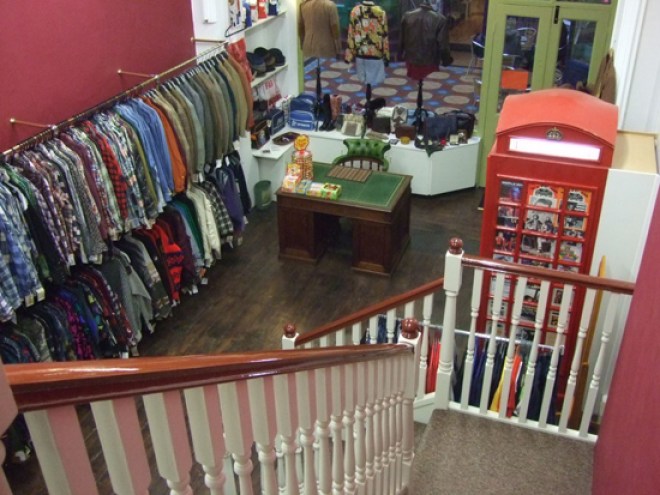 A young guy called James helps out every other Saturday.  He has done a bit of modelling for us and pestered me for a job.  Now that my eldest daughter Florence has gone to uni I agreed he could help out. I like to give the keen ones the opportunity.  I tend to help out at our costume shop quite a bit at the weekend especially around Halloween which is our busiest time of year.

John, a photographer based in premises opposite mine, took a photograph of myself and another woman from Mr Frog dancewear shop to send to our local rag the Daily Examiner.

The purpose is to send a press release to promote the Halloween fair. My suggestion was for Tracey and I to look suitably glum pointing at the space where the stolen banner used to be. In the end we agreed it was giving our fair too much of a negative spin and was far more ‘take a break’ than daily broad sheet.

James had a reasonable day and he manage to complete the couple of jobs I asked him to do.  Including putting out our new reproduction dresses and packing away some summer stock. 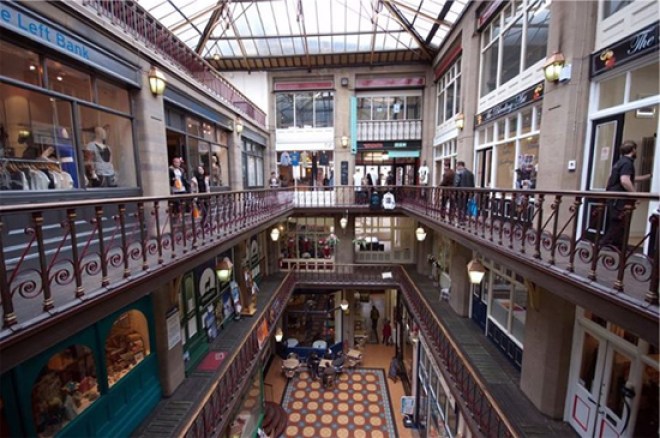 The shops inside Byram Arcade 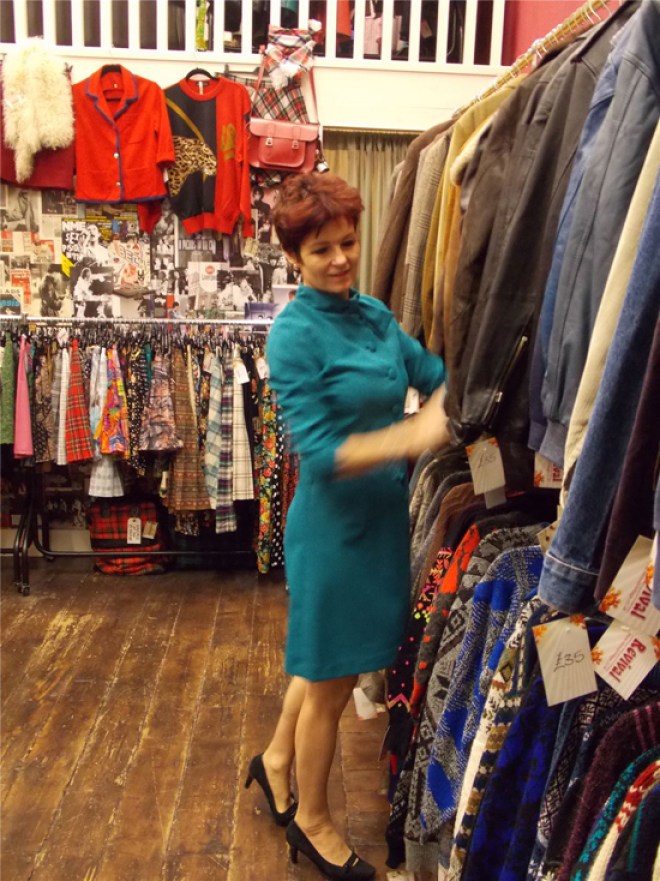 Thank you so much for Helene to take the time to write this diary for me. It’s really opened my eyes to the realities of running a vintage store, something which I’ve always fancied doing. If you have a vintage store I’d love to hear about your experiences and whether Helene’s week was similar to yours!