If you’re looking for an authentic 1920s makeup-look DON’T look at The Great Gatsby – it’s great for a general sense of style and decadence of the roaring Twenties but for some reason they made-up Carey Mulligan with great sweeps of 50s eyeliner which isn’t right at all!

For 1920s make-up inspiration take a look at the movie stars of the day, but don’t forget that dramatic makeup suited the world of black and white movies, and stars like Clara Bow, Theda Bara and Pola Negri wore way heavier makeup than regular people would have done, especially in the daytime. 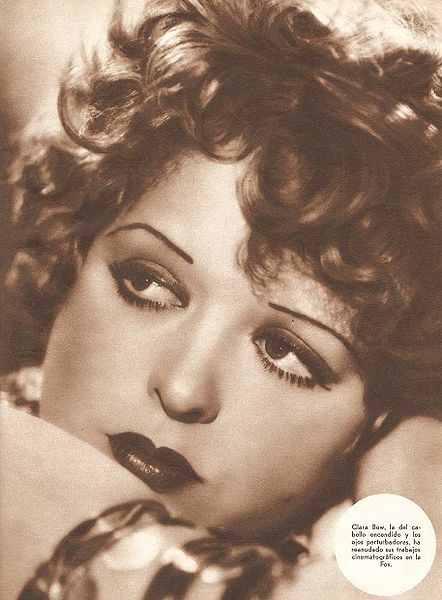 Eyebrows were plucked to be thin and then darkened with eyeliner or kohl. They were often turned down slightly at the edges to frame the eyes.

The bright young things of the 1920s lined their eyes in kohl (both above and below the eye) and, for a more vampish look, often wore dark eyeshadow (grey, black or purple are good) around the eyes too. Think light smudged kohl for daytime and seriously smokey eye makeup for evenings. Mascara was worn on both top and bottom lashes.

Pink or red blusher should be added to the apples of the cheeks to add a little girlish blush, but not to contour the face (don’t sweep along the cheekbone).

When adding foundation, cover your lips too, allowing you to change your natural lip-line slightly. Accentuate your cupids-bow with a lip pencil (both top and bottom) and narrow the edges of your lips before filling in with a dark pink or red lipstick. Your lips should look like you’re puckering up for a kiss!

If you’re feeling a little flirty don’t forget to add a beauty spot. It’s up to you where, just have fun with it! As well as the simple beauty spot, other shapes like stars and hearts were also popular.

Wearing nail polish was a pretty new idea in the 1920s. The fashion was to leave the half-moon and nail tip were bare and white and to just paint the center of the nail.

If you want some more 1920s makeup inspiration take a look at the gallery here, and don’t forget to check out my post about 1950s makeup too!

Source and copyright: 1: This work is in the public domain in that it was published in the United States between 1923 and 1977 and without a copyright notice.8: source