Jean Patchett was one of the best known models of the 1950s. Today, February 16th, was her birthday and she would have been 88 so here’s a look back at the girl that fashion photographer Irving Penn described as A young American goddess in Paris couture. 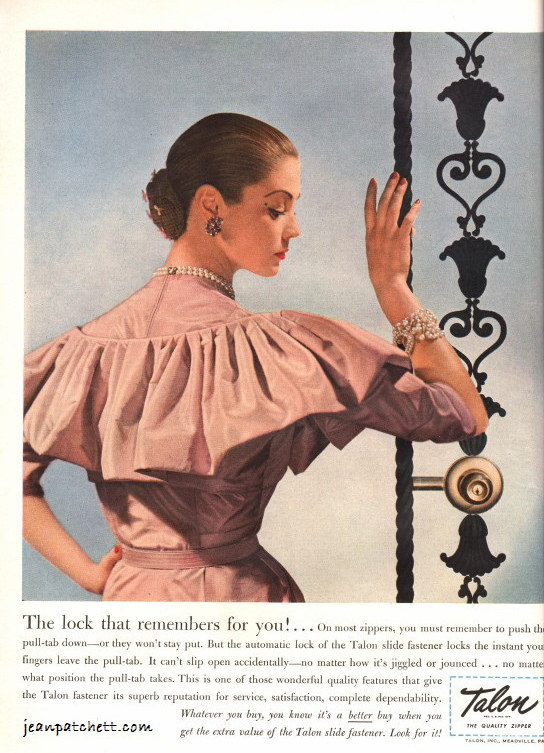 During the 1950s she became one of the most popular models of the 1950s along with Dovima, Suzy Parker, Dorian Leigh, Evelyn Tripp and Lisa Fonssagrives. She became famous not only for her beauty mark, but also for her unattainable ice-cool demeanor. I bet Alfred Hitchcock loved her!

Another reason she claimed not to smile in photographs was that “I have baby teeth; when I open my mouth I look like a child”. I can’t find a photo of her smiling, so I can’t verify this!

She worked predominantly for Vogue, but also did a lot of advertising work and her face can be found everywhere in magazines of the 1950s. One of her most famous covers is the iconic 1950 cover for Vogue photographed by Erwin Blumemfeld which featured only her eye, lips and beauty mark (below).

Patchett is said to have refused to work before 10 am or after 4:30 pm because she liked to cook meals for herself and her husband and would only work 3 ½ days a week.