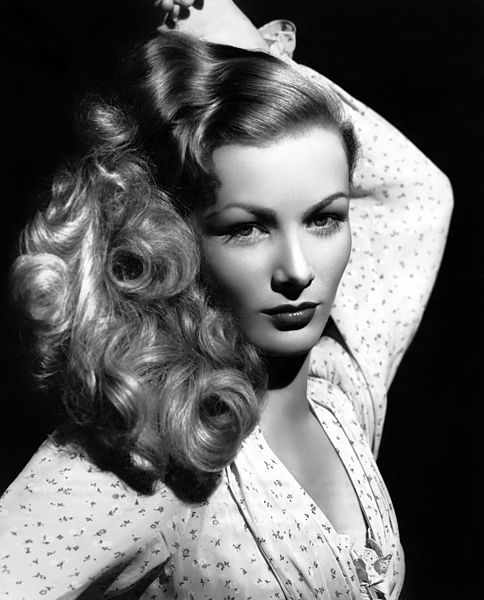 Veronica Lake was one of the most popular movie stars in the early 1940s. She made her name paired with Alan Ladd and was known for playing sexy femme fatale roles.  The image of her looking out from beneath her trademark hairstyle – the peek-a-boo fringe (said to be the inspiration for Jessica Rabbit’s hair) wowed the public and helped to catapult her to stardom.  Her sexy hairstyle was copied by so many women that she had to make adverts during the war encouraging women to wear their hair up to avoid them getting their long hair caught in factory machinery.

She had a reputation for being difficult to work with, and earned the nickname ‘the bitch’ from her co-stars. Her popularity took a dive when she took the role as a Nazi spy in the 1944 movie The Hour Before the Dawn and her increasing health problems, including being diagnosed with paranoid schizophrenia and alcoholism, aided her demise. By the end of the 1940s her mega-stardom was pretty-much over but the image of her smouldering at the camera and beautiful long blonde hair remain one of the most striking images of 1940s cinema.

Image source and copyright: This work is in the public domain because it was published in the United States between 1923 and 1963 and although there may or may not have been a copyright notice, the copyright was not renewed.