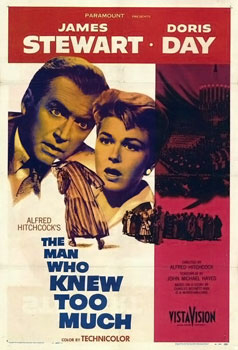 If you follow my blog you might have noticed that I’m going through a bit of a Hitchcock phase at the moment. I very much enjoyed The 39 Steps last week (much to my surprise and delight) but sadly I can’t say the same about this movie.

Up until this point I’ve pretty much enjoyed every Hitchcock movie I’ve ever seen: North by Northwest, Psycho, The Birds, To Catch a Thief, The Lady Vanishes etc. Psycho is a bit weird and not one of my favourites but all of them are great movies in their own right, so I was expecting The Man Who Knew Too Much to be equally good.

Before I get into the reasons for my disappointment with this movie I’ll give you a little background in case you don’t know it.  Hitchcock made two different versions of the The Man Who Knew Too Much: one in 1934 starring Peter Lorre and the 1956 version I watched with Doris Day and James Stewart. 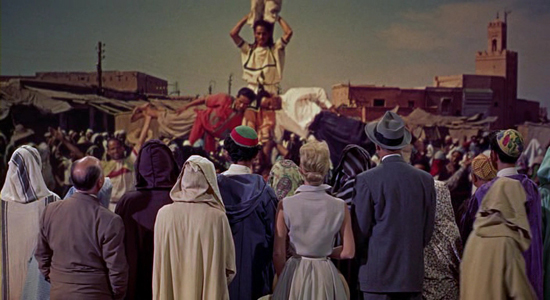 Hitchcock’s cameo appearance in the movie, and no I didn’t spot him at the time!

James Stewart plays a father whose child gets abducted to stop him revealing a secret he gets told by a dying man. He doesn’t seem to react in a particularly paternal way about this and proceeds to argue and behave unreasonably throughout the movie. This includes forcibly medicating his wife because he seems to be irritated her grief at her child being kidnapped. Doris Day on the other hand LETS herself be medicated by her overbearing husband (*rolls eyes*) and far from being the strong woman she is in most other movies she just comes across as weak, 2-dimensional and unable to do anything without her husband’s say-so. 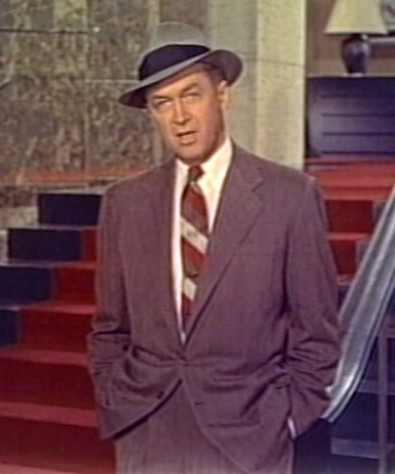 Jimmy Stewart: totally unlikeable and frankly a bit of a d**k

Un the upside she does sing a cracking rendition of Whatever Will Be, Will Be (Que Sera, Sera) (which you can watch below) and wears beautiful clothes throughout.  If I’m honest I hate movies that involve children (or animals) being threatened (it’s just not my idea of a good time), so that might have affected my verdict on this movie. Simply put it just wasn’t my cup of tea.

Has anyone seen the 1934 version of the film? Is it very different?  I’d be interested to watch it to see the differences, when Hitchcock was asked about the two versions he had this to say: “Let’s say the first version is the work of a talented amateur and the second was made by a professional.”

Have you seen this movie? What did you think of it and how it compared to other Hitchcock movies?