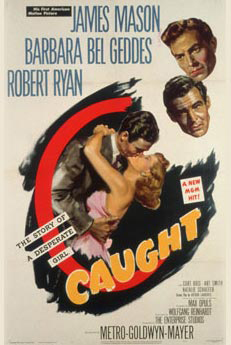 I took a break from Hitchcock movies and delved into the world of 1940s Film Noir this week. ‘Caught‘ is ‘The Story of a Desperate Girl’ who gets herself trapped in a marriage to a controlling sadistic husband but then ultimately falls for James Mason (who wouldn’t?).

It’s the first movie James Mason made in the US, and you can see why he went on to be a major star afterwards, he makes a great romantic hero! I’ve been pinning James Mason like crazy over on Pinterst if you’d like to take a look…

Leonora, played by Barbara Bel Geddes, isn’t a particularly likeable character to start out with. She’s a silly girl who models in a department store and is determined to snag herself a rich husband. So when she meets millionaire Smith Ohlrig (Robert Ryan) she sees dollar signs and is instantly smitten.

Ohlrig proposes to Leonora purely because somebody taunts him that he’ll never marry, and she accepts because she wants to be rich. So far it sounds like their own fault if they’re not happy together, right? Not the best basis for a happy marriage and I didn’t have a lot of sympathy for Leonora at this point. 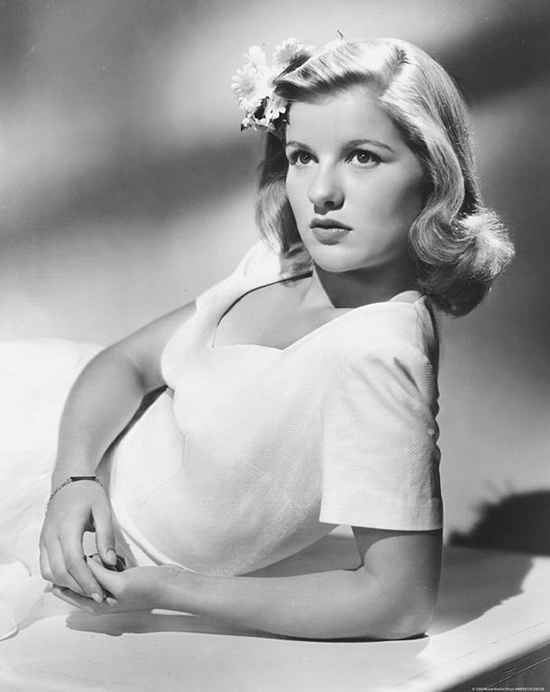 I can’t talk about the movie too much without spoiling the plot, so if you’re planning on watching the movie you might want to skip the next couple of paragraphs!  Leonora leaves her unpleasant husband and falls for decent hard-working (and rather sexy) doctor James Mason, before she realises she is pregnant by her husband. She returns to him, and he threatens to take the baby away from her if she leaves – not because he loves her and wants her to stay, just to assert his power over her. He basically locks her up in her room and torments her throughout the pregnancy until she reaches breaking point.

When he collapses (I’m not sure whether it’s an anxiety attack or something like angina), she refuses to help him and ends up going into early labour.  I’m not sure really what happens at the end of the movie – it’s all a bit confusing. I think her husband survives but she loses the baby, which (being brutally honest) solves the problem so she can be with James Mason, but being a 40s movie the grim facts are glossed-over a little and it was all a little vague…

Anyway, it’s an OK movie – nothing to really write home about although it gets considerably better as soon as James Mason comes into the story. Sadly he doesn’t arrive on-screen until half way through, and the other characters in the story are pretty unlikable so you don’t get as involved in the story as you would otherwise. Definitely worth a watch if you love James Mason. If you’re not bothered I’d probably leave this one alone…

Take a look at the trailer below and let me know what you think!

I also found this link where you can watch the movie online here. I’d love to know what you think!

Image source and copyright: 1, This work is in the public domain because it was published in the United States between 1923 and 1963 and although there may or may not have been a copyright notice, the copyright was not renewed.  2, This image is of a poster, and the copyright for it is most likely owned by either the publisher or the creator of the work depicted. It is believed that the use of scaled-down, low-resolution images of posters to provide critical commentary on the film, event, etc. in question or of the poster itself, not solely for illustration qualifies as fair use