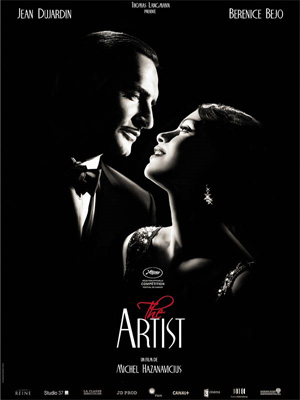 I know this isn’t really a classic movie, especially as it’s only 3 years old, but it’s the first silent movie to win an Oscar since 1927 so I thought it had to be worth a watch. And boy am I glad I did, it was fabulous from start to finish!

The basic plot revolves around handsome silent movie star, George Valentin, who is at the height of his career when he meets a young actress, Peppy Miller. With his help she gets noticed and rises as a movie star in her own right. Talkies are just starting to be made at this time and George refuses to get involved with them, claiming they are just a fad.

Peppy embraces talkies and becomes a superstar while George is ruined after putting all his money into one last silent movie and then losing everything in the stock market crash. I won’t tell you any more – I don’t want to spoil the story!

Both of the main characters are totally adorable, Peppy (played by Bérénice Bejo) is quirky and gorgeous and full of vivacity and life, and George (played by the gorgeous Jean Dujardin) is an amazing blend of Gene Kelly and Rudolph Valentino, which is quite a feat to pull-off.

There are some amazing touches of genius in this film, one is this scene below with Peppy and the coat-stand which I just love:

Another great moment is a nightmare that Valentin has features some of the only sounds (other than music) in the movie. He hears sounds all around him, starting with his glass making a sound when it puts it down on the table,  but he is unable to make a sound himself – a nightmare I can imagine lots of silent movie stars must have had when talkies came around!

Oh! And how the little dog didn’t win an Academy Award I just don’t know!

And if you’re left in any doubt about whether you’d love the movie just check out this amazing dance scene:

This has swiftly become one of my favourite movies, it totally deserved all those awards it won! Have you seen it? What did you think?

Image source and copyright: This image is of a poster, and the copyright for it is most likely owned by either the publisher or the creator of the work depicted. It is believed that the use of scaled-down, low-resolution images of posters to provide critical commentary on the film, event, etc. in question or of the poster itself, not solely for illustration qualifies as fair use