An actor or actress dying suddenly during the filming of a movie can either make it a huge success of cause enormous problems (like Oliver Reed dying during the filming of Gladiator). Here are 9 classic Hollywood movies which either the star died suddenly on-set or was murdered/committed suicide during production.

Marilyn was part-way through filming “Something’s Got to Give” with Dean Martin and Cyd Charisse when she died unexpectedly in August 1962. The movie was never finished or released but was remade a few years later as Move Over, Darling starring Doris Day, James Garner and Polly Bergen. 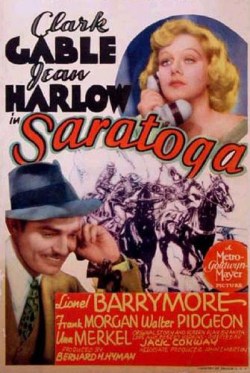 The iconic peroxide blonde died from kidney failure (which may or may not have been caused by her excessive use of hair dye) on June 7, 1937 aged just 26. Most of the movie had been shot by the time she died, and the rest of her scenes were filmed using a stand-in.

Her co-star Clark Gable said it was like being “in the arms of a ghost” filming the remaining scenes with another woman. Read more about Jean Harlow’s death here.

Natalie Wood died in suspicious circumstances when she disappeared from on-board a yacht she was sharing with co-star Christopher Walken and husband Robert Wagner.

Most of her scenes had been filmed by the time of her death, but MGM decided to shut-down production of the already troubled movie. The film was eventually completed using a body double and released two years after her death without much commercial success. Read more about Natalie Wood’s mysterious death here.

Oliver Reed died of a heart-attack in May 1999 whilst filming Ridley Scott’s epic “Gladiator.” Most of his scenes had already been filmed at the time of his death, but the remaining CGI work involved in digitally finishing his scenes was rumoured to have cost around $3 million. 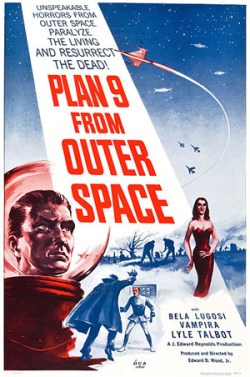 Bela Lugosi, famous for his role as Count Dracula in the 1930s died from a heart attack in 1956 while filming “Plan 9 from Outer Space.” His movie career was very much on the skids at this time and he had resorted to appearing in B movies.

The Director instructed his chiropractor (who looked nothing like Lugosi) to complete the actor’s scenes. The movie was not a success.

James Dean was killed in a car accident on September 30, 1955, aged just 24. He had already filmed all of his scenes in “Giant”. He was the first actor to be nominated posthumously for an Oscar both for “Giant” and “East of Eden.”

Hollywood legend Clark Gable died of a heart attack after filming a strenuous action sequence. It has been suggested that his insistence of doing his own stunts may have contributed to his death.

Most of his scenes had been filmed by the time of his death, and a body-double was used to finish a few remaining scenes in the movie. Read more about Clark Gable here.

Bruce Lee died far too young on July 20, 1973. He had paused filming the movie “Game of Death” to make his first Hollywood movie “Enter the Dragon” but died due to an allergic reaction to painkillers before he could finish “Game of Death”. The movie was finished using body doubles and even a cardboard cut-out of Lee. 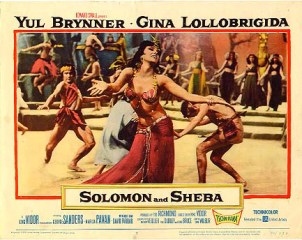 Hollywood heart-throb Tyrone Power died from a heart-attack during the filming of 1950s ‘sword and sandal’ epic Solomon and Sheba.  Power fell ill during a strenuous sword-fighting scene and died en route to the hospital.

Even though Power had filmed almost two thirds of the movie the studio eventually decided to replace him with Yul Brynner.

Image source and copyright: 1, This work is in the public domain because it was published in the United States between 1923 and 1963 and although there may or may not have been a copyright notice, thecopyright was not renewed. 2, 3: This image is of a poster, and the copyright for it is most likely owned by either the publisher or the creator of the work depicted. It is believed that the use of scaled-down, low-resolutionimages of posters to provide critical commentary on the film, event, etc. in question or of the poster itself, not solely for illustration qualifies as fair use