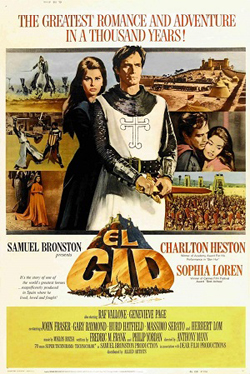 Wow, talk about a movie Epic! You think Harry Potter’s Deathly Hallows was a long movie? Try this one, it’s a full 3 hours of sandals, sword-fighting and sex-appeal!

Charlton Heston and Sophia Loren are the headliners and they have fabulous on-screen chemistry. Whether they love or hate each other (and there’s plenty of time for both in this movie) you can feel the sizzle through the screen!

It’s not worth me even getting started on the plot, it’s so epic that it spans an entire lifetime. All you need to know is that Charlton Heston plays Don Rodrigo (also known as El Cid), who is a great Spanish hero and his love interest is Sophia Loren. He kills her father, who is clearly a baddie, and this causes quite a bit of trouble between them…

In a nutshell, they make-up, have kids, get expelled from the kingdom and epic battles are fought for the future of Spain. All in all it’s a magnificent movie. There aren’t a lot of laughs, but it keeps you fascinated and looks thoroughly beautiful throughout.

Not everyone was happy with the movie though, Sophia Loren pitched a fit when she saw that Charlton Heston’s name was above hers on an electric billboard in Times Square and sued the studio for beach of contract. Apparently she felt her name being beneath her co-stars inferred some kind of inferiority causing her ‘irreparable damage’. She lost the case. I wouldn’t like to suggest she was a bit of a Diva, but you can probably make your own mind up about that one. Apparently she had a similar row about who got top billing on The Countess From Hong Kong with Marlon Brando. She lost that case too…

Nevertheless that famous Sophia Loren spirit was put to fabulously feisty use in El Cid and she and Charlton Heston are a magnificent on-screen pairing. Take a look below and you’ll see what I mean!

Image source and copyright: 1, This image is of a poster, and the copyright for it is most likely owned by either the publisher or the creator of the work depicted. It is believed that the use of scaled-down, low-resolution images of posters to provide critical commentary on the film, event, etc. in question or of the poster itself, not solely for illustration.