I’ve had a lot of interest in the photographs I posted yesterday of the female Nazi concentration camp guards of Bergen-Belsen* and the sentences they all received.

*Bergen-Belsen is the concentration camp where Anne Frank died – I didn’t realize that until today.

A few of you wondered about the back-stories of these women and the kind of lives they lived before they became monsters. I decided to look into it and what I discovered was really surprising, some (as you would expect) joined the SS by choice, some were conscripted. and some started off as prisoners who ‘worked their way up’. All of their stories make for fascinating reading. I’m not sure what I was expecting, but it certainly wasn’t what I discovered.

I’ve also included links through to the original war crime trial transcripts for each woman, they make for a compelling read. Amazingly most of them claimed to know nothing about the gas chambers and all of them say they weren’t involved in the selection process and did no more than slap prisoners with their hand when they didn’t comply. What the camp prisoners had to say is a very different matter…

All the women were tried for war crimes and crimes against humanity and what I found even more shocking is how young most of them were.

I’ve also included the story of perhaps the most notorious of the female SS members in the concentration camps, the vile (and vain) Irma Grese (below). 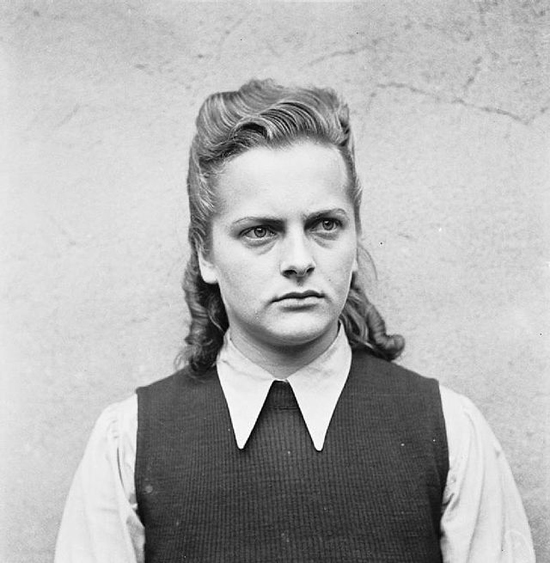 Age at the end of the war: 21
Also known as “the Beautiful Beast”, “The Hyena of Auschwitz”, “Angel of Death”
Job: Warden of the women’s section of Bergen-Belsen (also at Auschwitz and Ravensbrück)
Sentenced to death.

Irma Grese was found guilty of crimes against humanity and was sentenced to death for her role in the Nazi concentration camps of Auschwitz, Ravensbrück and Bergen-Belsen. When she was executed she was just 22 years old, the youngest woman to be executed under British law during the 20th century.

She was born in Wrechen, Mecklenburg in Germany and had a fanatical devotion to the Nazi girls organization (Bund Deutscher Mädel) from the age of 14. She worked on a local farm before leaving to work as a nurse. She claimed she was conscripted to join the S.S. in 1942.

The Backstories of the Female SS Camp Guards

She was renowned for being vain and sadistic, enjoying the terror she inspired in the women prisoners. She singled-out and victimized not only the sick and weak but also any women who retained traces of their former beauty, and would enjoy being meticulously groomed, perfumed and coiffured amongst the ragged prisoners.

She enjoyed the power her beauty gave her and had various lovers among senior SS officials, including Josef Mengele (famed for performing horrific experiments on the inmates). She was accused of murder, ill-treatment, beatings and torture as well as selecting prisoners for the gas chambers (she would always make sure to choose the pretty ones).

She had a reputation as being sadistic and cruel and enjoyed inflicting pain and terror. She was also known to inspect prisoners looking for interesting tattoos, and would have items (including lampshades) made from their skin. Various items made from human skin were found in her quarters when Bergen-Belsen was seized by the British troops.

After a fifty-three day trial, Grese was sentenced to hang for crimes against humanity. 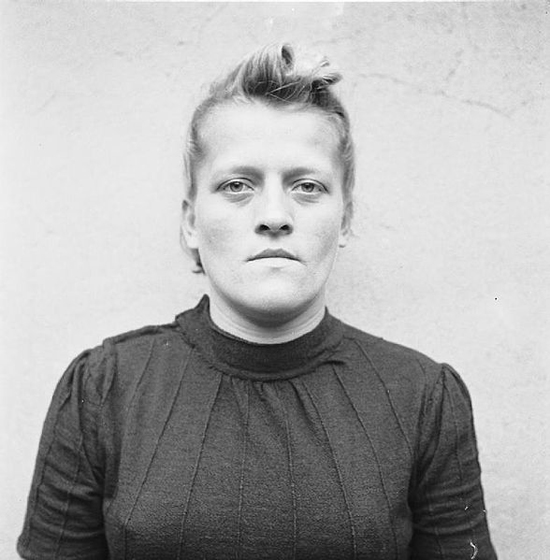 Age at the end of the war: 27
Also known as “The SS Woman Without Uniform”.
Sentence: 10 years imprisonment later reduced to 7 years

Hildegard Lohbauer was a German unmarried mother with 2 children who worked in a weaving factory. She refused to go when she was conscripted to work in an ammunition factory and was imprisoned in Ravensbrück camp and later transferred to Auschwitz, Birkenau, and Bergen-Belsen.

She started as an ordinary prisoner but got promoted to Arbeitsdienstführerin, and was in charge of organising prisoners for the working parties, and would often beat prisoners who wouldn’t co-operate. 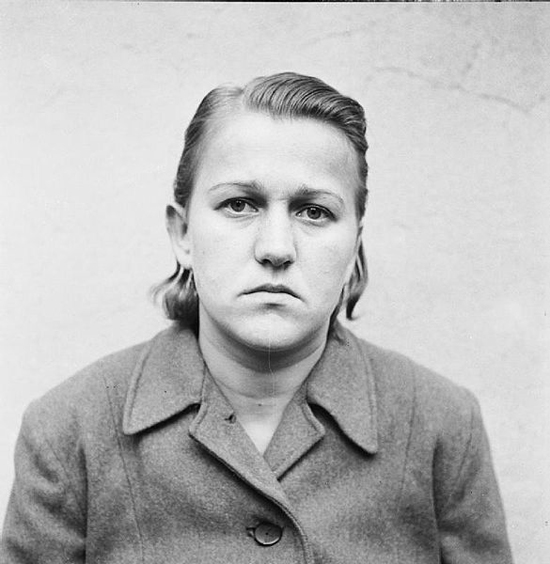 Age at the end of the war: 23
Sentenced to 1 years imprisonment.

She arrived at Belsen in March 1945 where she had various jobs including overseeing prisoners working in the kitchens.

See the transcript of her trial here 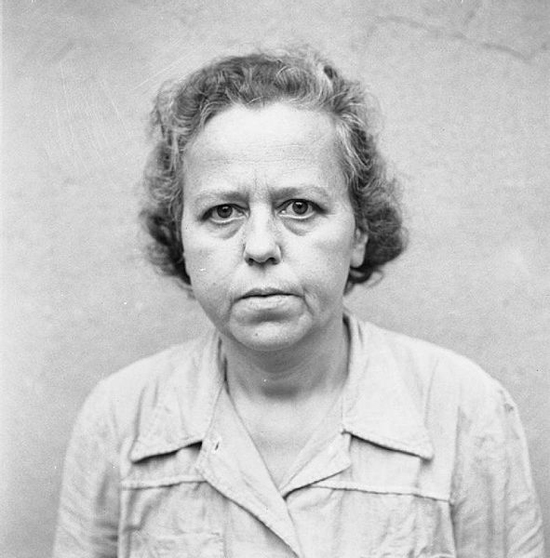 Age at the end of the war: 41
Sentenced to 10 years imprisonment.

Sauer was a saleswoman in a shop at the start of the war, but after her house was destroyed by a bomb she went to work in a munitions factory.

When prisoners were brought in to work in the factory she was employed as Aufseherin to oversee them, and from there she was moved to another factory and then on to Belsen in February 1944. She oversaw inmates working in the kitchens at the camp and was convicted for ill-treatment. 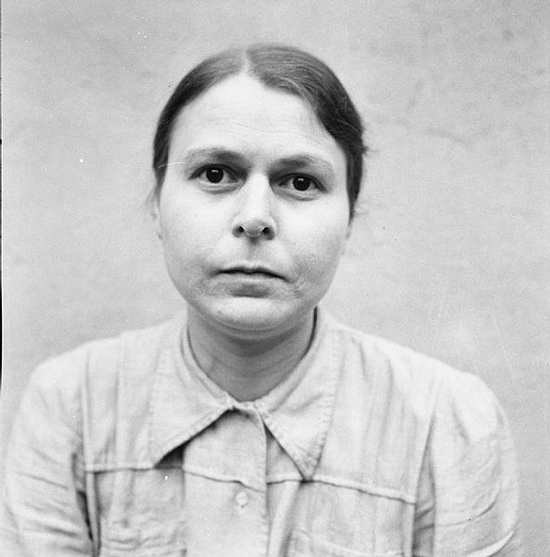 Age at the end of the war: 27
Sentenced to 5 years imprisonment.

Gertrud Fiest worked in a factory before being conscripted into the S.S. in August 1944. She remained at the factory as an Aufseherin overseeing prisoners working in the factory. She was moved to Belsen in February 1945. 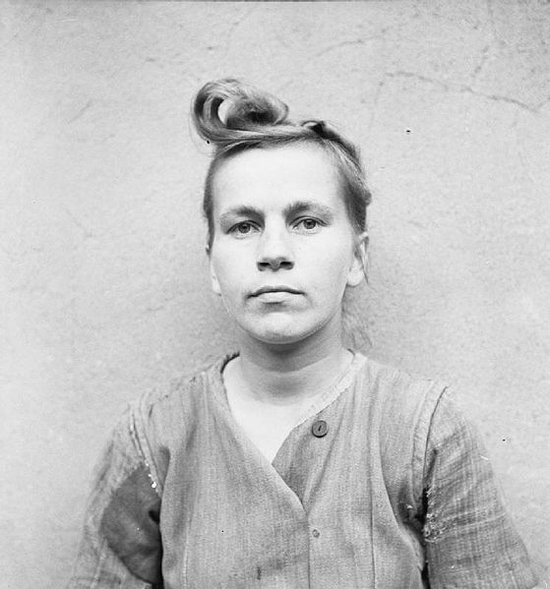 Age at the end of the war: 26
Head wardress of the camp.

Volkenrath worked in a hair salon before the war and was called up for national service in 1939.

She was conscripted into the S.S. in 1941 and was sent to Ravensbrück, followed by Auschwitz and she later became the cruel and un-relenting head wardress of Bergen-Belsen. Whilst there she was renowned for her cruelty and made selections for the gas chamber. She was known as  “the most hated woman in the Bergen-Belsen camp”.

She was executed for war crimes and crimes against humanity in Hamelin Prison on 13 December 1945. 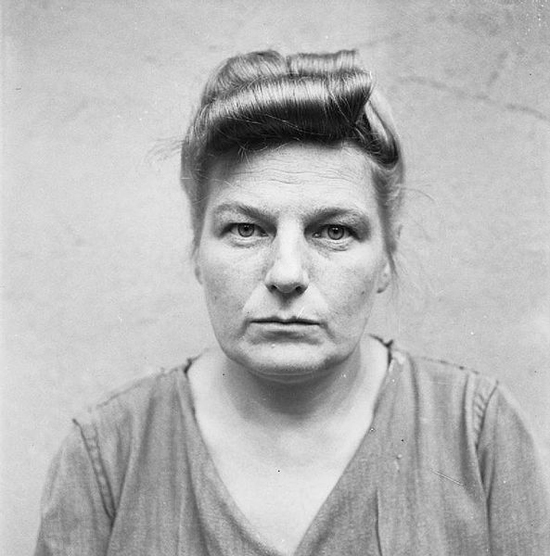 Age at the end of the war: 40
Deputy Wardress at Bergen-Belsen under Irma Grese and Elizabeth Volkenrath (above).
Sentenced to 15 Years Imprisonment, later reduced to 12 years with an earliest release date of 16 November 1953.

Herta worked as a saleswoman before the war, and was conscripted to the S.S. in November 1939. She worked at Ravensbrück camp for 3 years, then Lublin, Cracow, Auschwitz and finally Bergen Belsen.

After her release from prison in 1953 she lived under the assumed name Herta Naumann until her death in 1997. 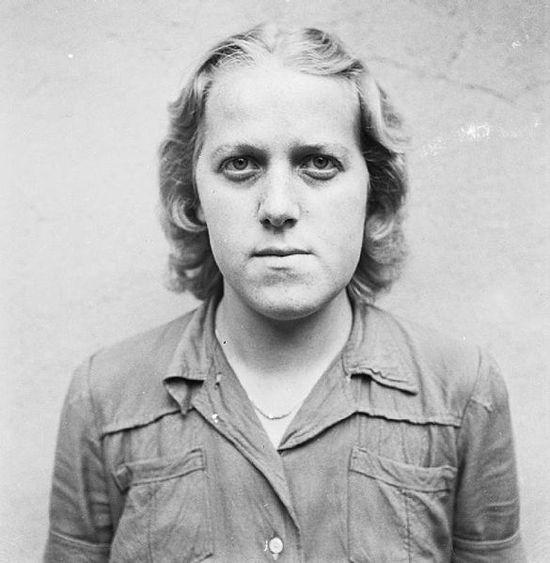 Age at the end of the war: 24
She was sentenced to 10 years imprisonment. Herta Bothe was released early from prison on 22 December 1951.
Also known as the “Sadist of Stutthof”

Herte Bothe was a housewife until she became a nurse in August 1940.In October 1942 she was conscripted and sent to Ravensbrück as Aufseherin, followed by Strutthof near Danzig and Bromberg. She led a four-week death march of women from there to Bergen-Belsen.

Whilst in the Stuffhof camp she became  known as the “Sadist of Stutthof” because of her brutal beatings of inmates, and had a reputation as a ruthless overseer at Bergen-Belsen. 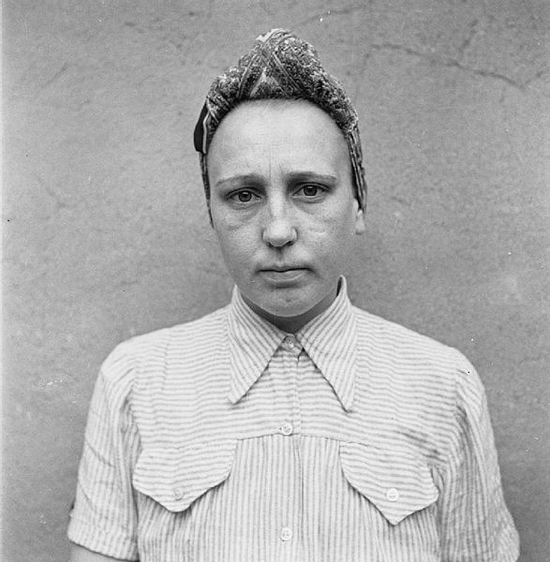 Age at the end of the war: 23
Sentenced to 3 years imprisonment

Frieda worked in a textile factory until she was conscripted to the S.S. in October 1944. After a period of illness she was transferred to Belsen in February 1945. 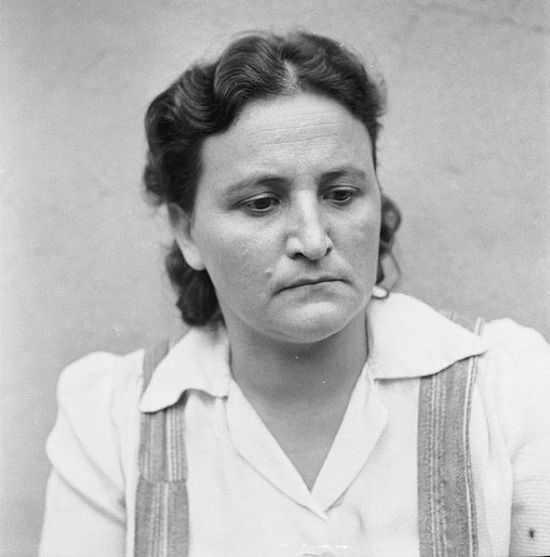 Age at the end of the war: 35
Sentenced to 15 years imprisonment.

Helene (or Helena) Kopper was born in Poland and was a housewife with a husband and two children before war broken out. She was arrested in 1940 by the Gestapo for possessing anti-German leaflets and sent to Cracow. From there she was transferred to Ravensbrück for 2 years and then on to Auschwitz and Bergen Belsen.

She worked in the Camp Police at Bergen Belsen. 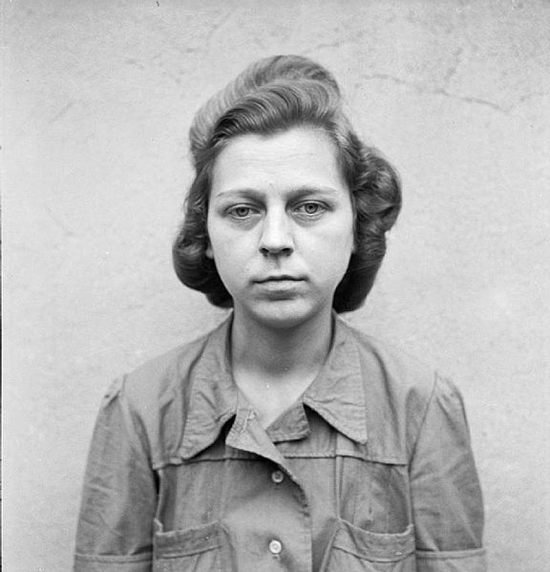 Age at the end of the war: 23
Sentenced to 10 years imprisonment.

Ilse Forster worked in a factory during the war, she was conscripted to the S.S. in August, 1944, and was sent to a labour camp at Langenbielau for six weeks for training. She returned to the factory to supervise prisoners after her training and marched with the prisoners to Bergen-Belsen. 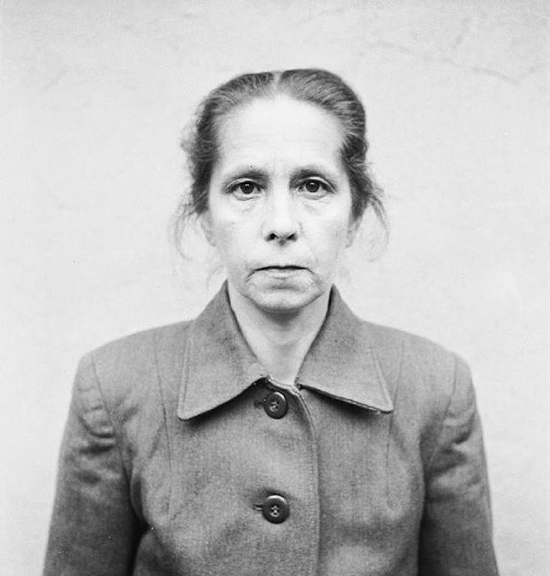 Juana Bormann (or Johana Borman) chose to join the S.S. in 1938 because she ‘could earn more money’.  She worked in Ravensbrück, Auschwitz, Birkenau and then Bergen-Belsen. She was renowned for her cruelty and was known to kill prisoners by setting her hungry dog on them.

Before the war she worked in a lunatic asylum.

She was found guilty of war crimes and hanged (along with Grese and Volkenrath) on December 13, 1945.

Think the men were any better? Decide for yourself! Read the back-stories of the male concentration camp guards here.

Image source and copyright: This artistic work created by the United Kingdom Government is in the public domain.
Information sources: 1, 2, 3,

18 thoughts on “The Backstories of the Female SS Camp Guards”