It’s interesting to see how all of them tried to worm their way out of any responsibility in the war crimes trial. All the guards who herded the unfortunate people into the gas chambers try to exonerate themselves by suggesting they weren’t involved in the selection process, and that they were just following orders. Whereas the doctors who did the selections claimed they weren’t told what they were selecting people for, they were just splitting the healthy from the sick, young or weak.

Hmmmm. It seems these justifications didn’t wash with the jury… 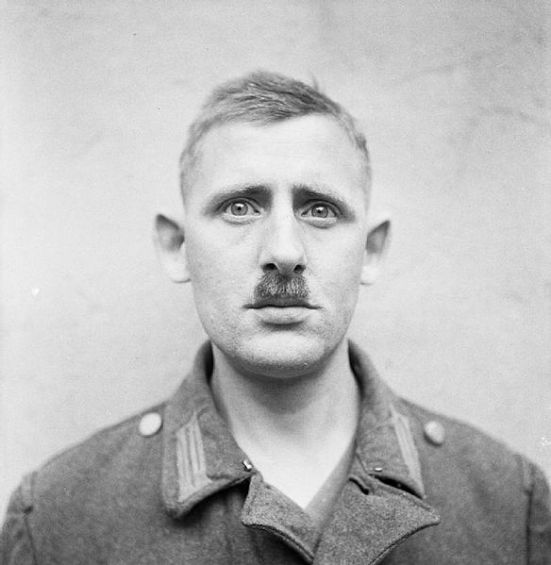 Age at the end of the war: 32
Nationality: Danish
Job: Kitchen Commander at Bergen-Belsen
Sentenced to death.

Despite his almost comical Hitler-tribute mustache, there was nothing amusing about Ansgar Pichen’s part in the war.

He was born in Denmark, but then became a Polish national in 1922 when Upper Silesia was taken over by Poland. When Poland was occupied by Germany in 1940 Pichen was conscripted into the German infantry and was left with a crippled left hand after being wounded in 1942.

When he was released from hospital he was sent to work in a P.O.W. punishment camp at Blechanner (a sub-camp of Auschwitz III), then on to Bergen-Belsen. He claimed because of his injured hand he was excused from guard duties and just worked in the kitchens. He claimed to have never mistreated prisoners under his charge, but was contradicted by a number of witnesses who saw him beat and shoot inmates.

He was executed on 13 December 1945 for war crimes and crimes against humanity.

Transcript of his trial 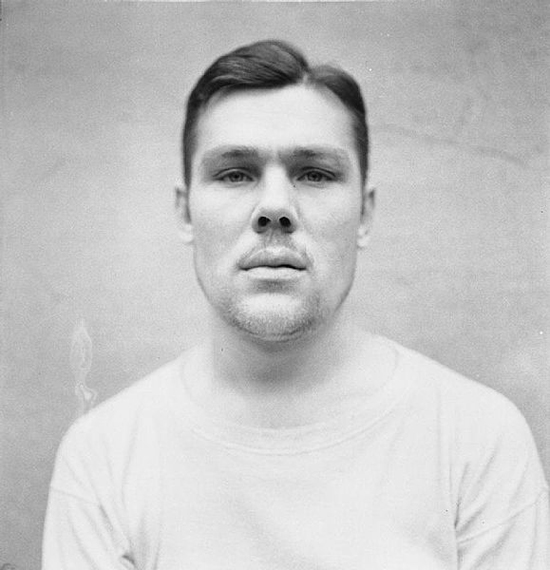 Age at the end of the war: 31
Nationality: Polish
Sentenced to life imprisonment, released after 15 years.

Ostrowski was a Polish national from Lodz and was a painter who was married with one child before the war. He was conscripted into the Polish army in 1939 and fought on the Russian Front before being wounded and being captured by the Germans in 1940.

He was imprisoned by the Gestapo but escaped in 1942 and went to Berlin where he was recaptured 2 years later. He was sent to Gross Rosen concentration camp and then Dora labour camp where he worked building tunnels until he was injured. Because he was sick he was transferred to Bergen-Belsen.

In Belsen it was alleged that he was promoted to camp policemen and would beat other prisoners and would withhold food from the sick and weak so that they starved to death.

He was found guilty and sentenced to life imprisonment was changed to 15 years. He was released on June 24, 1955. There are no records of what happened to him after his release. 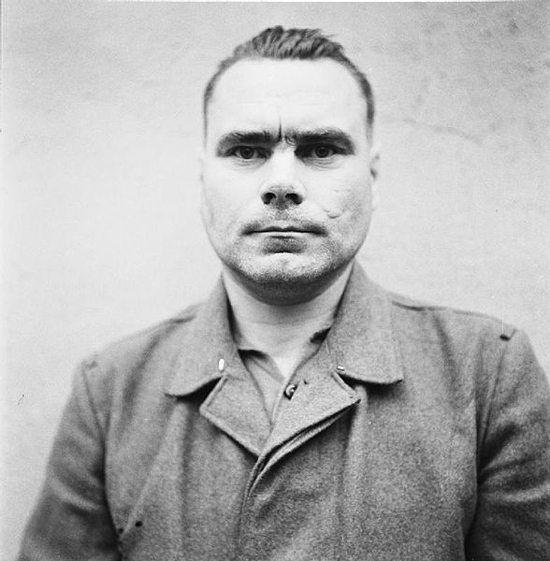 Josef Kramer: known as the “Beast of Belsen”, sentenced to death.

Age at the end of the war: 39
Also known as ‘The Beast of Belsen’
Nationality: German
Job: In charge of Gas Chambers at Auschwitz and then Commandant of the Bergen-Belsen concentration camp
Sentenced to death

Kramer was one of the most notorious people (along with Irma Grese) who were tried in the Bergen-Belsen war crimes trial.

He joined the National Socialist (Nazi) Party in December 1931 and they S.S. shortly afterwards.  He specialised in working in concentration camps and started his career there as early as 1934 and stayed there until the end of the war. He worked in various concentration camps including Auschwitz and Bergen-Belsen.

He was also the lover of the vile Irma Grese (she who had lampshades made from the tatooed skin of prisoners) and they were hanged on the same day as each other, December 13th 1945. 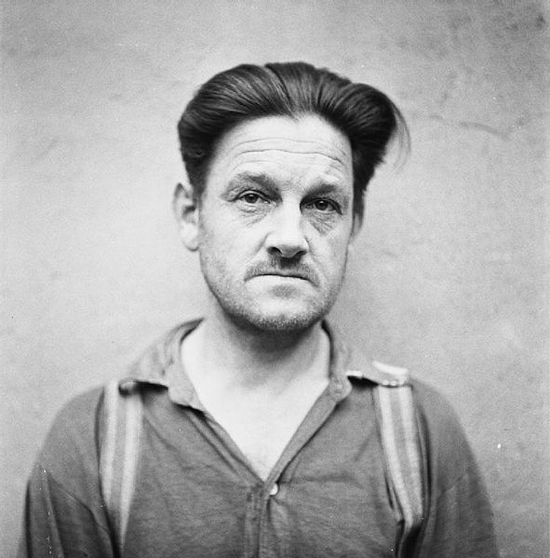 Age at the end of the war: 39
Nationality: German
Sentenced to death.

After leaving school Franz Hößler became a photographer before working in a warehouse. He lost his job during the Great Depression of the 1930s and became a member of the National Socialist (Nazi) party and the S.S. in 1932.

By the time war broke out he was married with three children. He worked at the Dachau concentration camp from as early as 1933 and stayed there until after the outbreak of the war.

He was personally responsible for herding many thousands of people into the gas chambers, either by force, or by misleading speeches such as this one:

“On behalf of the camp administration I bid you welcome. This is not a holiday resort but a labor camp. Just as our soldiers risk their lives at the front to gain victory for the Third Reich, you will have to work here for the welfare of a new Europe. How you tackle this task is entirely up to you. The chance is there for every one of you. We shall look after your health, and we shall also offer you well-paid work. After the war we shall assess everyone according to his merits and treat him accordingly.

Now, would you please all get undressed. Hang your clothes on the hooks we have provided and please remember your number [of the hook]. When you’ve had your bath there will be a bowl of soup and coffee or tea for all. Oh yes, before I forget, after your bath, please have ready your certificates, diplomas, school reports and any other documents so that we can employ everybody according to his or her training and ability.

Would diabetics who are not allowed sugar report to staff on duty after their baths.”

But of course these people weren’t going for a shower, they were going into the gas chambers. Hößler was executed along with Kramer, Pichen and some of the other men below. 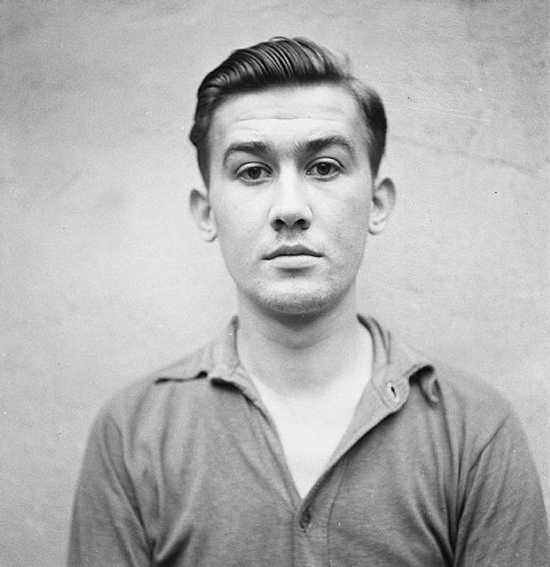 Age at the end of the war: 24
Nationality: German
Sentenced to death

Wilhelm Dörr worked on a farm before the war. He was a member of the Hitler Youth from 1932 until he joined the Waffen-SS in 1940. He moved to the S.S. in 1942 and worked as a guard at a succession of concentration camps including Sachsenhausen, Dora and Kleinbodungen where he managed slave-laborers. When U.S. troops neared Kleinbodungen, he led a death march of inmates from there to Bergen-Belsen and killed numerous prisoners who slowed the progress of the march.

Hew was sentenced to death for war crimes and the atrocities which had occurred on the death march. 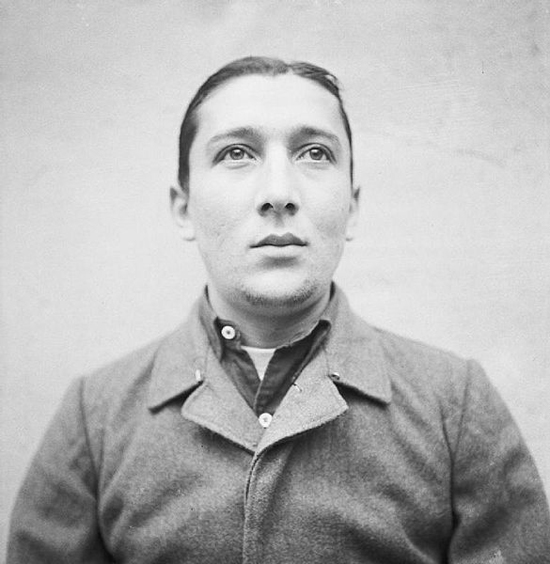 Age at the end of the war: 27
Nationality: Austrian
Acquitted

Schlomoivicz was born in Vienna and was caught by the Gestapo in 1939 for not having a valid permit which then became a charge of being Jewish and behaving in an ‘anti-German’ way.  He was sent to the concentration camp at Oranienburg where he remained until 1941.  He was then sent to Gross Rosen, and from there on to Auschwitz.  He worked as a Kapo, an inmate-foreman in charge of other prisoners but was acquitted of the charge of war crimes. 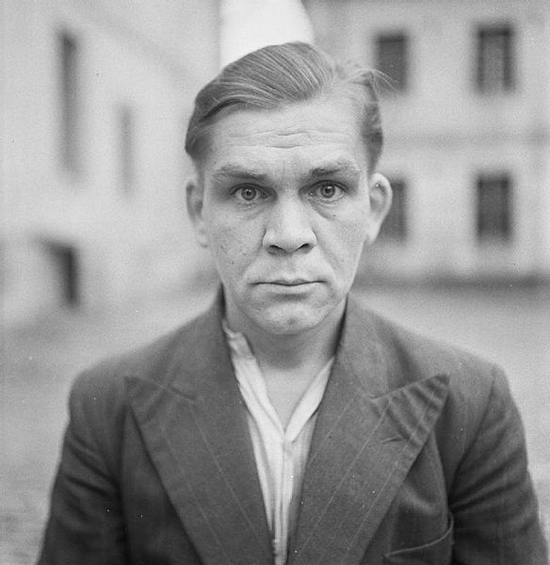 Age at the end of the war: 32
Nationality: Norwegian
Life imprisonment, later changed to the death penalty.

Norwegian-born Zoddel was described as a ‘violent career criminal’ who was sent to a concentration camp in 1942. Within Bergen Belsen he became a Kapo and was in charge of overseeing other prisoners and  distributing food rations. He was sentenced to life imprisonment for ill-treatment of prisoners at Bergen-Belsen.

Later he was charged with murdering a female prisoner at a military tribunal in Celle 31 August 1945 and was sentenced to death. 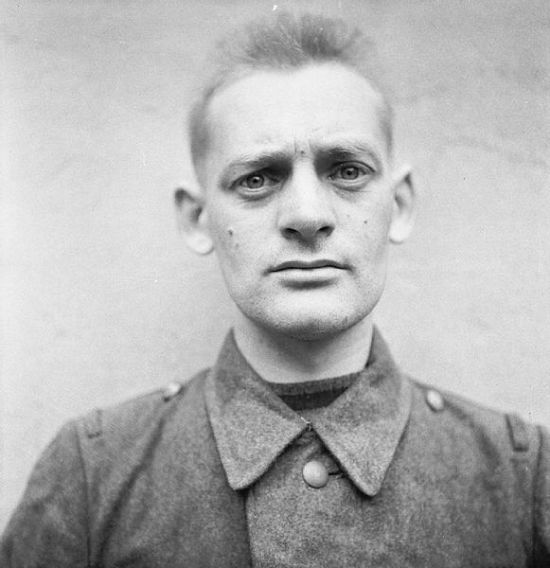 Age at the end of the war: 30
Nationality: German
Job: Camp commander of the Kleinbodungen subcamp of Mittelbau-Dora
Sentenced to death.

Stöfelwas was a German national who worked as clerk before joining the German army in 1934. He joined the S.S. in 1936 and worked as a guard at the Dora concentration camp in 1943. In 1945 he led a death march of prisoners from Dora to Bergen-Belsen and was convicted of crimes against humanity and executed along with the other guards above. 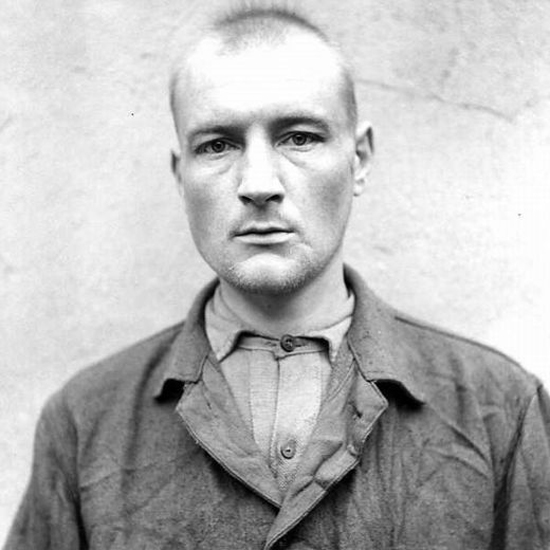 Age at the end of the war: 29
Nationality: German
Acquitted

Schmitz was a German studying engineering before the war. Because he had been a member of the Communist Youth Movement and refused to join the Hitler Youth he was dismissed from his first job. After failing to find work he was imprisoned for pawing goods which didn’t belong to him and was later conscripted to the Arbeitsdienst. He once again ran away in a stolen car and was imprisoned again. Once released he was called up, now that the country was at war, but refused to go and was sent to Mauthausen and then Auschwitz.

He was a Kapo at Auschwitz and oversaw other prisoners but was acquitted of any war crimes. 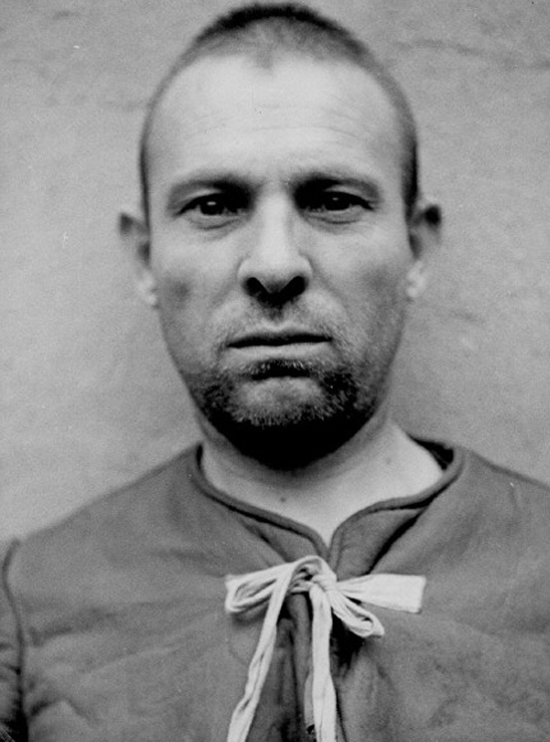 Age at the end of the war: 32
Nationality: Yugolsavian
Job: Blockführer of the women’s camp in Auschwitz and Bergen-Belsen
Sentenced to death

Weingärtner worked as a carpenter and when Germany attacked Yugoslavia he fought against them in the army. He was captured by the Germans but later released. He was conscripted to the S.S in 1942 and sent to Auschwitz to be a concentration camp guard.

He was Blockführer of the women’s camp in Auschwitz guarding over 1000 female prisoners, he later had a similar position at Bergen-Belsen. He was convicted of crimes against humanity and executed on 13th December 1945. 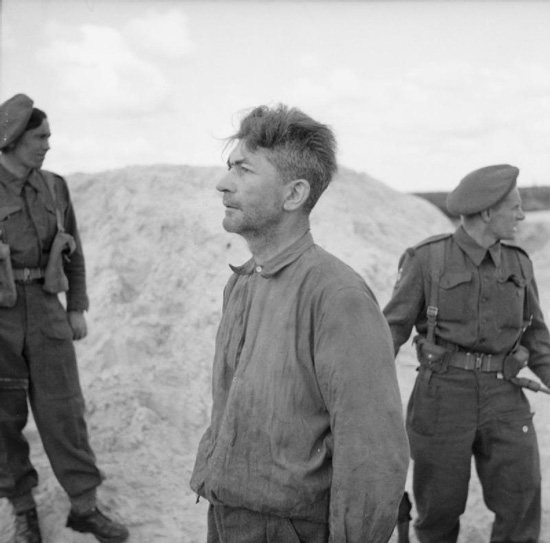 Age at the end of the war: 57
Job: Camp Doctor at Auschwitz and Belsen-Bergen
Nationality: Romanian
Sentenced to death

Dr Klein worked as doctor in Transylvania before joining the Romanian army in 1939 serving as a medic on the Eastern Front.  In 1943 he was posted to the German army and was sent to be the camp doctor at Auschwitz and later at Belsen Bergen. He was in charge of the selection process for the gas chambers and when asked how he reconciled genocide with the hippocratic oath he took as  adoctor he said:

He was found guilty of war crimes and crimes against humanity and sentenced to death and hanged along with the other camp personnel in December 1945.

Image source and copyright: This artistic work created by the United Kingdom Government is in the public domain.
Information sources: 1, 2, 3,