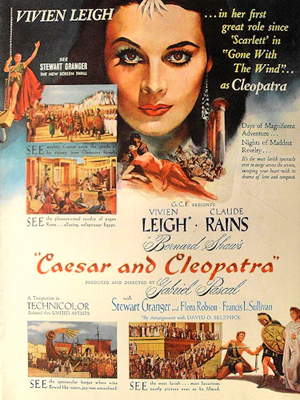 There are 4 major versions of Cleopatra that I know of: the silent movie version with the exotic vamp Theda Bara in the title role, the art deco masterpiece starring Claudette Colbert, the Taylor-Burton 1960s version and this: Caesar and Cleopatra.

This is a very different version of the Cleopatra story to the others which portray her as a determined and exotic queen who seduces Romans to gain power. In this version Cleopatra and her brother Ptolomy are petulant teenagers and Caesar is rather a father figure, whom she refers to as an elderly gentleman.

I always imagined Cleopatra would have been one of those teenage girls who matured really young – like those girls I remember from school who looked 17 when they were actually about 13 and who all the boys swarmed after (I wasn’t one of those girls).

Vivien Leigh’s Cleopatra may be a teenager, but she isn’t the sophisticated driven young woman I imagine Taylor’s Cleopatra would have been. She’s actually quite similar to her character in Gone with the Wind, a naive and rather spoiled little flibbertigibbet who is, frankly, rather childish. I half expected the precocious Cleopatra to say ‘fiddle-de-dee’ and tear down the curtains to make a dress! 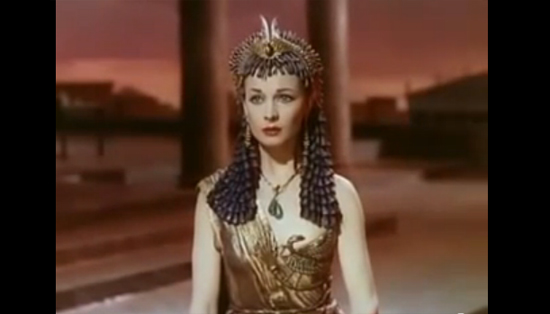 It’s also slightly strange that she has such a pronounced BBC-English accent – she sounds rather like Audrey Hepburn over-acting*. Caesar has a BBC accent too, but it isn’t quite as noticeable somehow.

*Apparently the producer of the 1963 movie Cleopatra considered Audrey Hepburn for the title role initially before he discovered Elizabeth Taylor.

Are all my complaints just because I was raised on the Taylor/Burton/Harrison version of Cleopatra? Possibly. I don’t honestly know.

When I saw on the title credits that Stewart Granger was in the movie, I naturally assumed he would play Mark Anthony, but that character doesn’t make an appearance. Instead Granger plays a gilded peacock of a Sicilian who delivers Cleopatra in one of his carpets. Mind you he looks fabulous in a short skirt so I imagine female audiences were kept pretty happy. 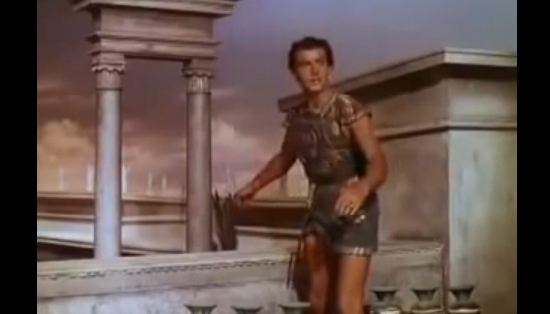 To sum up, this move was a bit of a disappointment. It was beautiful and epic and looked glorious, but I just wasn’t keen on the way the characters were portrayed. Vivien Leigh annoyed me as Scarlett O’Hara, and I’m afraid she provoked the same reaction in this movie too. Give me a Cleopatra with some sex-appeal and maturity any day! Check out the trailer below and let me know what you think!

You can also see more photos of Vivien Leigh as Cleopatra in my Pinterest gallery here.

Image source and copyright: This image is the cover of a videotape, DVD, Blu-ray Disc, etc. and the copyright for it is most likely owned by either the publisher of the video or the studio which produced the video in question. It is believed that the use of low-resolution images of video covers to illustrate the videotape or disc in question

One thought on “Movie Tuesday: Caesar and Cleopatra (1945)”