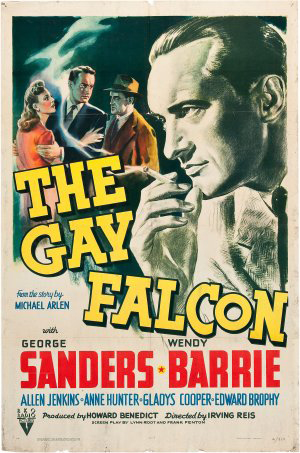 A movie called The Gay Falcon today would be a very different movie from this! Far from being what you might expect, this is the first in a series of detective movies starring the debonair and rather rakish investigator Gay Lawrence “The Falcon” played by George Sanders*.

*George Sanders voiced the deep enthralling tiger Shere Khan in Disney’s The Jungle Book. Interestingly he married both Zsa Zsa Gabor AND her older sister Magda Gabor and seemed to be as much of a ladies man in real life as his character is in this film.

The Falcon was introduced as a replacement for another movie detective The Saint, who was also played by George Sanders.

At the start of the movie we find Lawrence bored and going stir crazy after promising his long-suffering fiance to quit the detective business and stop chasing other women (no chance!). Luckily after a few minutes he is waylaid by a beautiful young woman (Wendy Barrie) who needs his help solving a string of high-society burglaries. This involves going to a glamorous party with his fiance, who is rapidly ditched for the new girl. The burglary turns into a murder and he and his female accomplice get embroiled in it all as does his fiance.

As a private investigator he’s all very charming and likeable, but frankly comes across as a bit of a cad. Especially in the last scene where he can’t decide between the two women in his life and then follows a different damsel in distress out of the room instead. He just seems unable to stop himself from chasing every skirt he comes across, but then we like our detectives broken in some way don’t we? They always seem to be a touch dysfunctional (Morse, Sherlock etc.) Actually that seems to be true for all but Agatha Christie’s detectives come to think of it. Poirot and Marple are definitely misfits but not badly-adjusted in the same way.

All in all this movie is an enjoyable piece of fluff: nothing too taxing and if you can ignore the overbearing sexism of the main character then it’s a good fun adventure! I tried searching for a clip of this movie but searching for ‘The Gay Falcon’ on YouTube brought up some very different search results which I don’t think I’ll share…

Image source and copyright: This image is of a poster, and the copyright for it is most likely owned by either the publisher or the creator of the work depicted. It is believed that the use of scaled-down, low-resolution images of posters to provide critical commentary on the film, event, etc. in question or of the poster itself, not solely for illustration