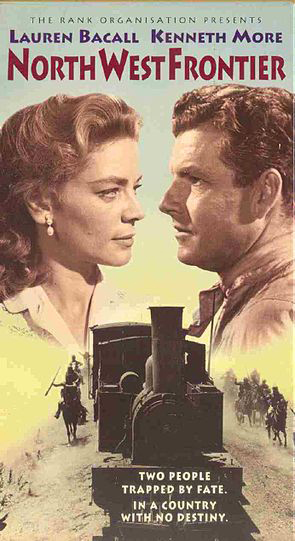 I actually watched this movie last week but haven’t had time to write it up until now. It was shown in the rush of nostalgia following the sad news of Lauren Bacall‘s death and I have to say I’m delighted this fiim was shown on TV.

Lauren Bacall called it a “good little movie… with a stupid title” referring to the film’s American title of ‘Flame Over India‘. It was released as ‘North West Frontier‘ in Britain and ‘Empress of India’ in Australia.

I’ve been racking my brains and I’m the only other Bacall movie I think I’ve seen is How to Marry a Millionaire, which I find hard to believe. Bacall is one of those screen icons who I seem to have always known about, so it seems impossible that I’ve only seen one other movie of hers. Anyway, if that IS true now I’ve seen two, and in contrast to the last movie I watched this is a cracker.

Despite the fact that it’s set in India, it’s a welcome contrast to a lot of 1940s and  50s movies which are littered with casual racism.  It’s set in colonial India, so I was rather expecting it to be an uncomfortable watch but this film is refreshingly different. One of the most likeable characters is Gupta, the heroic train driver. But I digress, let’s start from the beginning.

The movie is set in 1905 where the Maharaja has asked a British army Captain (the dashing Kenneth More) to take his son to safety during an uprising. The son’s governess is American Mrs Wyatt (Bacall) who is a widowed doctors wife.  Against the odds they hatch a wild scheme to escape in an old train along with a cynical and rather evil journalist (played by Herbert Lom), the elderly but very charming Mr Bridie (Colonel Pickering from My Fair Lady), the resourceful Governor’s wife, Gupta the heroic train driver and an arms dealer who finds all the killing rather distasteful. A diverse enough group to make the dangerous journey both gripping and truly entertaining. Mr Bridie is particularly charming and lovely throughout.

The plot centers around their attempt to escape from the insurgents and the nasty journalist’s attempts to surreptitiously kill the boy prince on the journey (booo hiss). To cut a long story short, they triumph against the odds with lots of bravery and ingenuity and of course Bacall and More fall madly in love by the end.

She was wonderful in this movie, brave, smart and independent in stark contrast with the way a woman was supposed to behave at the time. Bravo Bacall, this is a corker of a movie (although I rather agree with her about the nonsensical title!) Definitely worth a watch!

Image source and copyright: This image is of a poster, and the copyright for it is most likely owned by either the publisher or the creator of the work depicted. It is believed that the use of scaled-down, low-resolution images of posters to provide critical commentary on the film, event, etc. in question or of the poster itself, not solely for illustration qualifies as fair use under United States copyright law. Any other uses of this image, on Wikipedia or elsewhere, may be copyright infringement. See Wikipedia:Non-free content for more information.