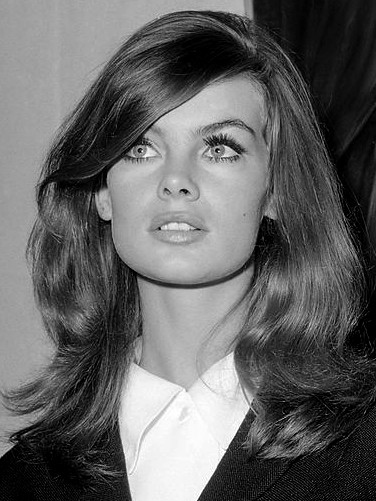 Jean Shrimpton is one of the best-known models of the 1960s and was an ‘it girl’ and icon of Swinging SIxties London. With her slim figure and coltish long legs she represented a real departure from the more grown-up sophisticated models of the 1950s.

After finishing a modelling course at the Lucie Clayton Charm Academy (famed for being the place where they teach you how to get out of a Jaguar E-Type without flashing your knickers at the waiting photographers) she became quickly popular as a model. This was in 1960 when she was just 17.

Her rise to become the highest paid model of the 1960s was partly due to her relationship with photographer David Bailey.

She met him while she was still an unknown model and their 4 year relationship benefitted them both enormously. She became Bailey’s muse and he helped to launch her modelling career. Together they became symbols of fashionable 1960s London.

She was also later romatically linked with actor, and another beautiful face of 60s London: Terence Stamp.

You might think the miniskirt was around throughout the 60s but this trend was made popular partly due to Jean Shrimpton. She caused outrage when she wore a miniskirt (the hem of which was a shocking 10cm above her knees) to the Victoria Derby in Melbourne. You can see this outfit in the video below – it looks like nothing out of the ordinary now but at the time it was quite revolutionary!

She retired from modelling and removed herself from the limelight in the early 1970s and currently runs a hotel in Penzance with her son Thaddeus. See some of Shrimpton’s most iconic photos here.