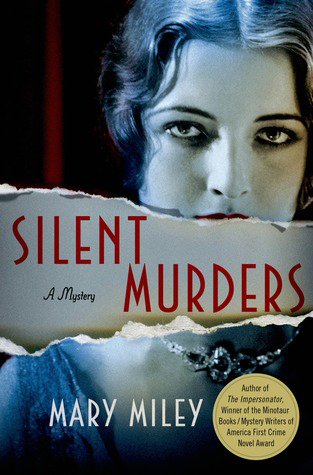 I have just read the most fabulous book! Silent Murders is a stylish murder mystery set in 1920s Hollywood. Not only is it an un-put-downable (that’s totally a word) story, but it’s set against a fascinating backdrop of real life film stars. The main character, Jessie, an ex-Vaudville actress with a rather shady past, lands herself a job working for Douglas Fairbanks at the studio he runs with Mary Pickford.

The insight into 20s Hollywood is fabulous. Jessie’s roommate is an as yet undiscovered Myrna Loy and we also come across a bit-part playing Gary Cooper (super-dooper)  who is hoping for his big break.

A series of seemingly unrelated deaths prompt Jessie to play detective and she gets herself involved in a world of murder, scandal and drug-dealing in the world of prohibition Hollywood. Not to mention the arrival of her irresistible but decidedly gangster ex-boyfriend who has chased her across the country.

This mystery is great fun as well as a fascinating insight into the partying and private lives of 20s Hollywood! It’s the best fun I’ve had between the pages for a long while!

Silent Murders: A Mystery by Mary Miley is available now and I thoroughly recommend you grab yourself a copy!