I don’t profess to be any kind of historical costume expert, but I do have an interest in vintage fashions and I love a good wedding dress. Because of this I’ve spent hours both looking at old wedding photos and watching Downton Abbey, and it strikes me that they don’t seem to tally at all!

Here are the dresses (or my sketches of them anyway) which are pretty close to the original styles. Obviously I haven’t drawn any of the embellishment – Lady Mary’s dress was covered with seed pearls and tiny crystals and there were beautiful embroidered patches on Lady Edith’s, but this gives you the general idea! 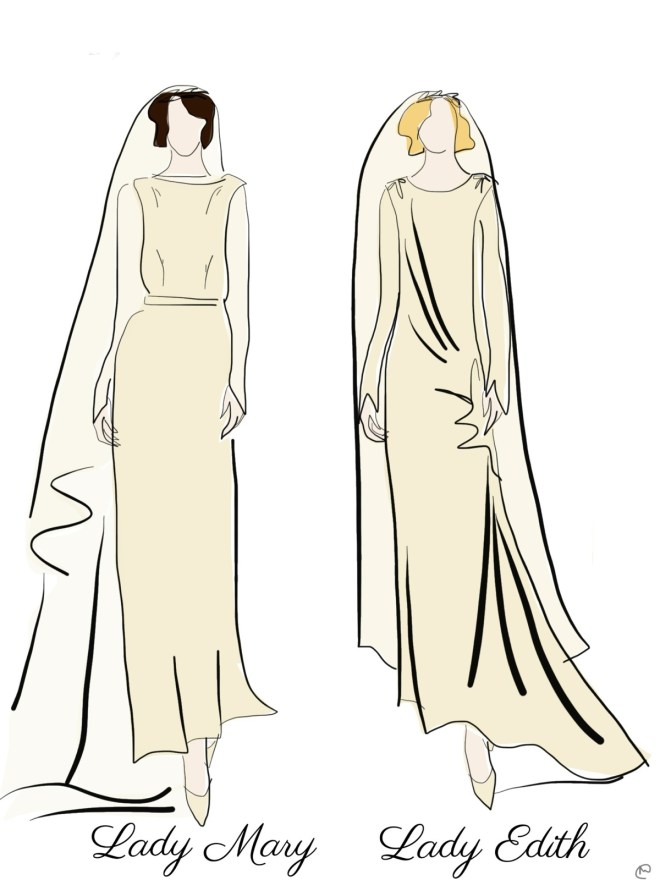 Downton Abbey started in the run-up to the First World War (around 1912) and the last series finished around the mid 1920s. So it covers the post-Edwardian era (which ended in  1910 with the death of King Edward VII but is sometimes extended until the start of WW1 in 1914) and the first half of the roaring 20s.

Women were very much corseted during the Edward Era, it was the time of the Gibson Girl and the horribly constricting S-Bend corset (below). 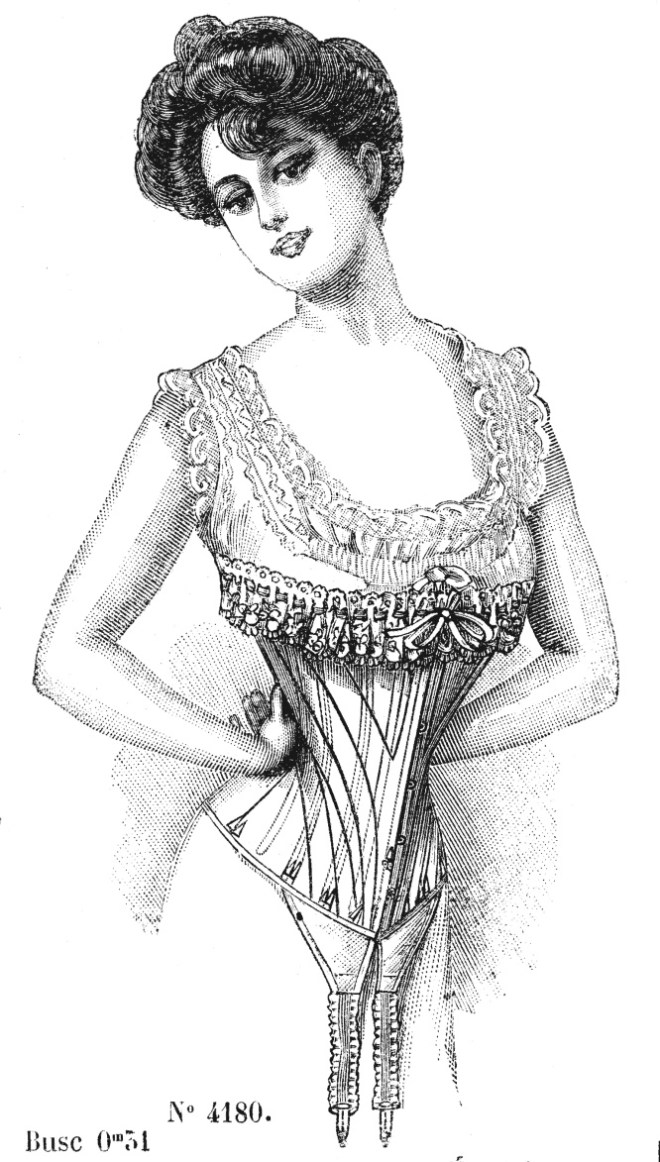 The S-Bend or Flat Fronted Corset popular in the Edwardian Era. It didn’t just make the waist tiny, it also contorted the back into an uncomfortable S shape by having a flat front.

By the early 1910s the female figure was starting to gain a little more freedom, with with hobble skirts and Empire line dresses becoming fashionable followed by the cocoon shapes later in the decade. We see lots of this kind of fashion in the early series of Downton. 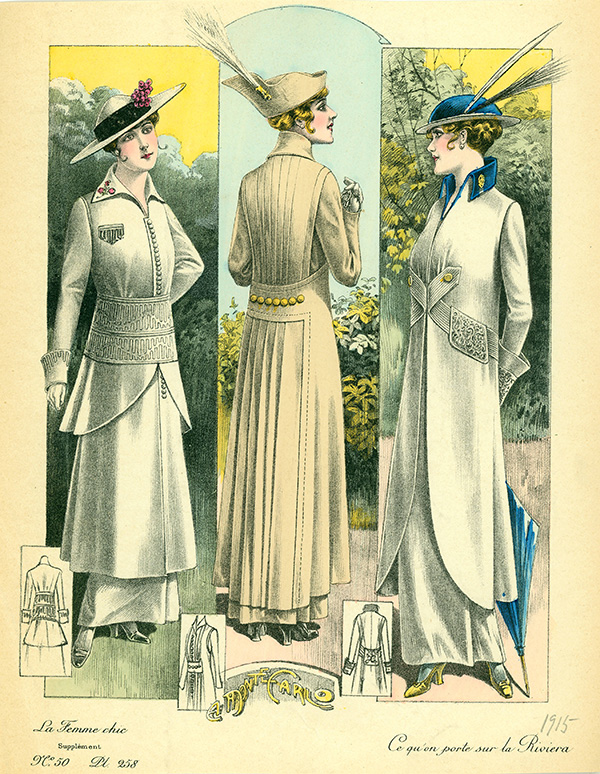 Fashions from 1915 showing the new shapes in fashion at that time.

Now I’m not saying they got all of the fashions wrong – far from it!  My question is specifically about the Downton wedding dresses (see them here). Both sisters (Lady Mary and Lady Edith) were married (or jilted) in around 1920 – 1921.

The style at this time was for straight boyish shapes with drop waists. Simple shapes using beautiful fabrics were  in fashion, but not the form fitting styles we see in the Downton wedding dresses, both of which are much more reminiscent of 1930s dresses.

The Downton Abbey Wedding Dresses: Did They Get It Wrong?

Here are some original wedding photos showing dresses in the early 1920s. You’ll see that the fashion was for shorter calf-length dresses with uneven hemlines and tiaras and veils worn low over the forehead (I haven’t picked these photos especially they are very typical of the time). 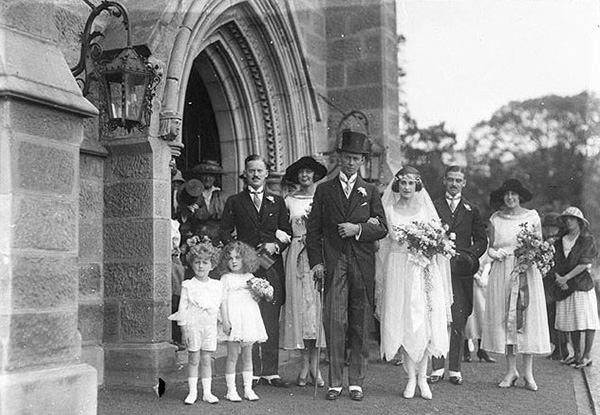 Wedding photo from 1922. The bride is wearing a calf-length dress with handkerchief hem and tiara worn forwards on the forehead. 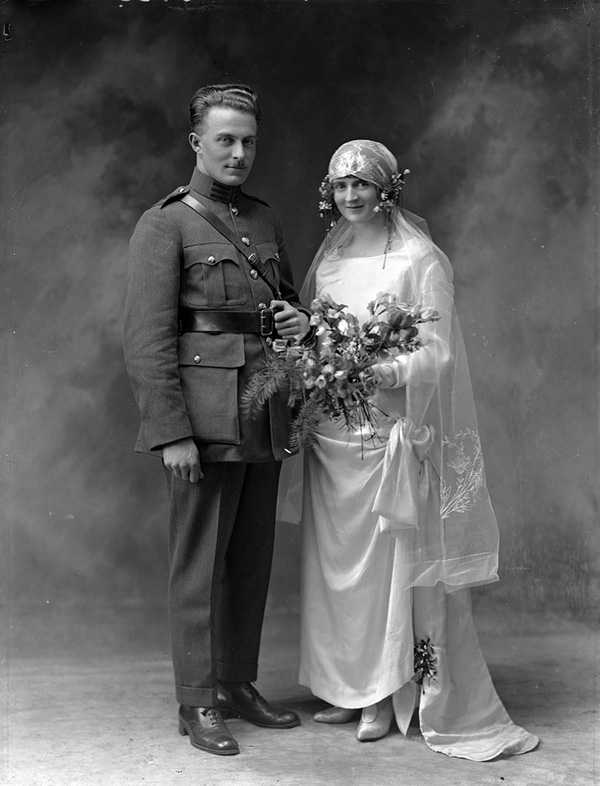 Wedding photo from 1924. The dress is a simple style, but with a drop waist, shorter hem and a veil worn low over the forehead. 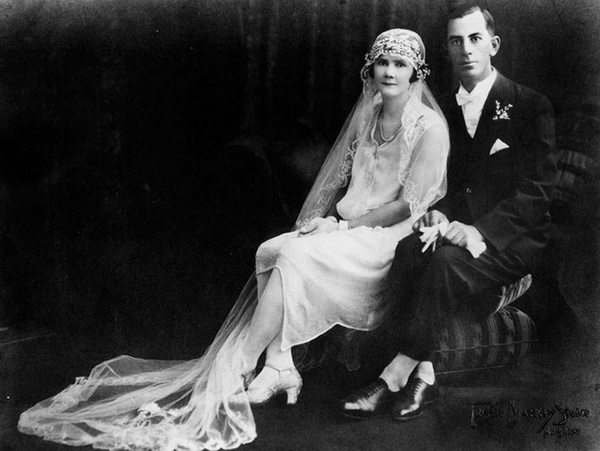 Wedding photo from 1925. The bride wears a simple shift-shaped dress with petal hem and veil/headband worn low over the forehead.

Towards the end of the decade (these pictures are from 1928 and 1929) we start to see a shift into more form-fitting gowns, but the tiaras and veils are still very much worn on the forehead, and I suspect the hemlines were still shorter. 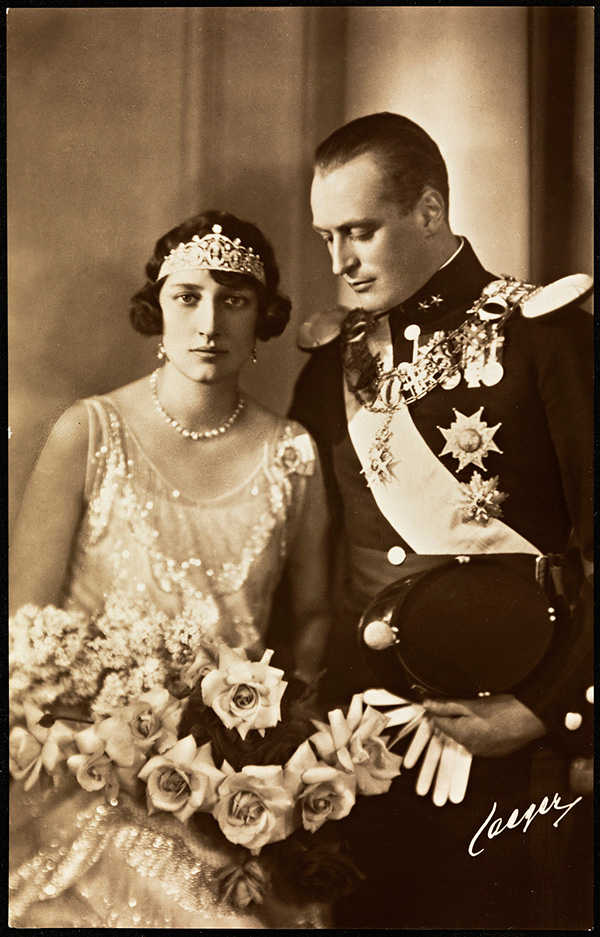 Wedding photo of Princess Märtha Prince Olav, 1929. Note the tiara is still being worn forwards on the head at this time. 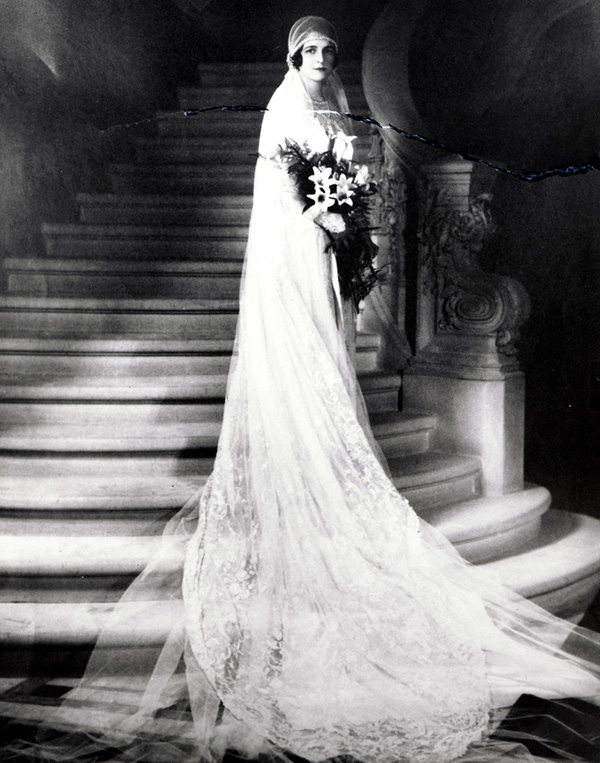 Wedding dress from 1928. It’s hard to see the actual dress here, but while the veil is long, it is still worn in a very much 1920s style.

Once you get into the 1930s (10 years or more after Lady Mary and Lady Edith are supposed to have worn their dresses) you start to see styles similar to theirs. Veils and tiaras start to be worn further back on the head, and dresses become longer, more form fitting and elegant. 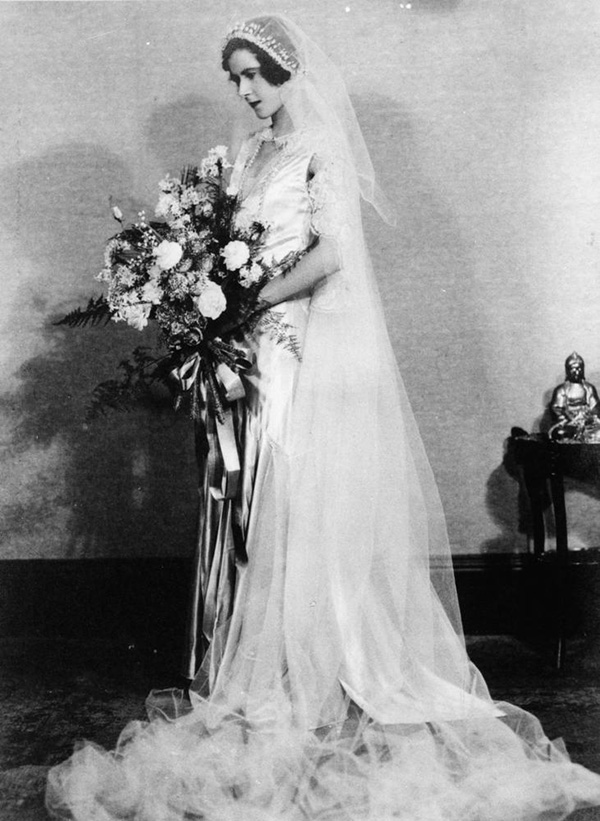 Florence (Cooee) Blume on her wedding day in Brisbane, 1931. She is wearing a form fitting long satin dress with long veil. 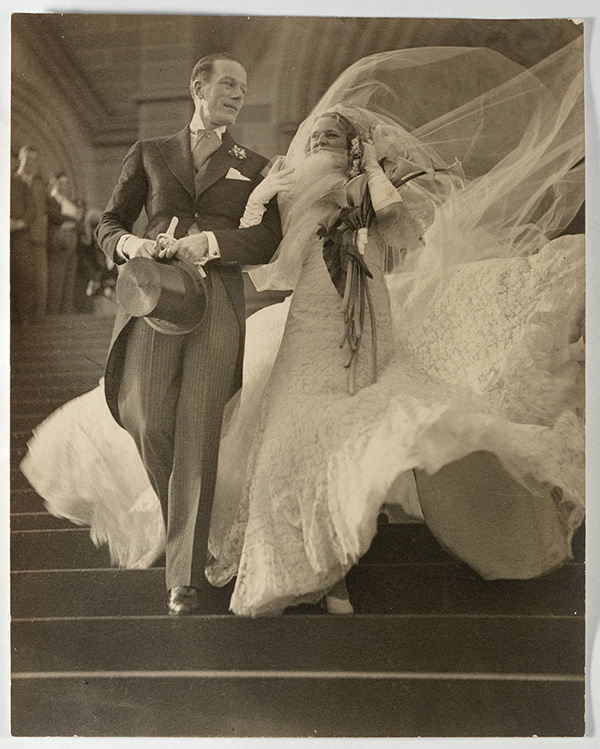 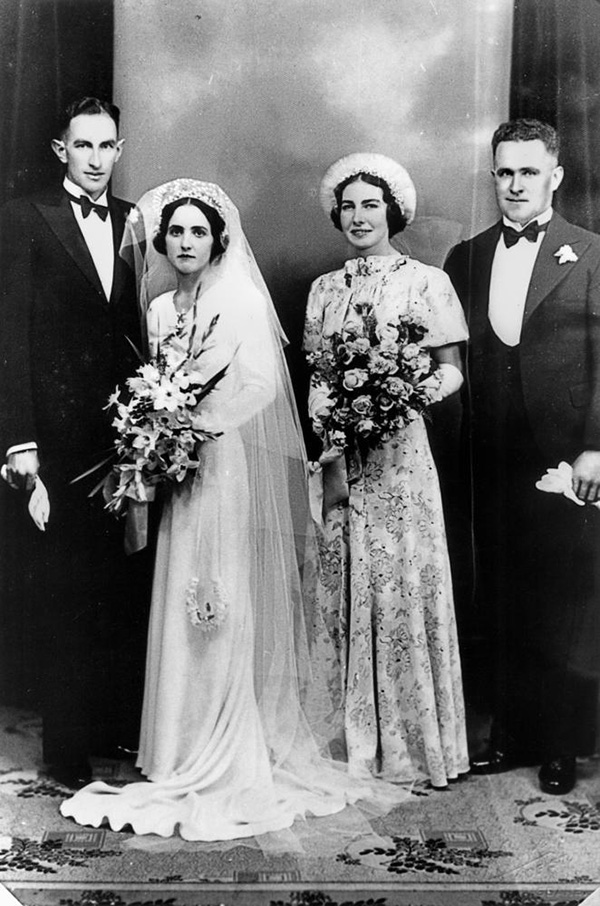 Wedding party for the marriage of Fred Horn and Rene Harper, April 1938, 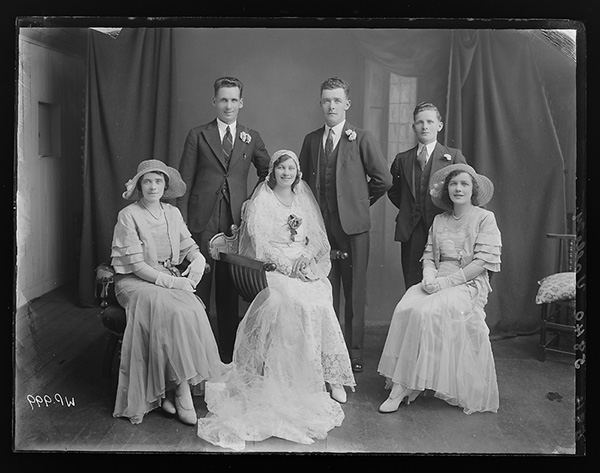 See what I mean now? The Downton girl’s dresses were long, elegant and draped to fit their bodies – much more like a 1930s dress than anything I’ve seen in 1920s (or WW1) fashions. Did they do it because they thought this would appeal to the audience more? Or perhaps I’ve got this totally wrong, but I don’t think so!  Take a look at the gallery below and let me know what you think!
Follow We Heart Vintage’s board Downton Abbey on Pinterest.

9 thoughts on “The Downton Abbey Wedding Dresses: Did They Get It Wrong?”