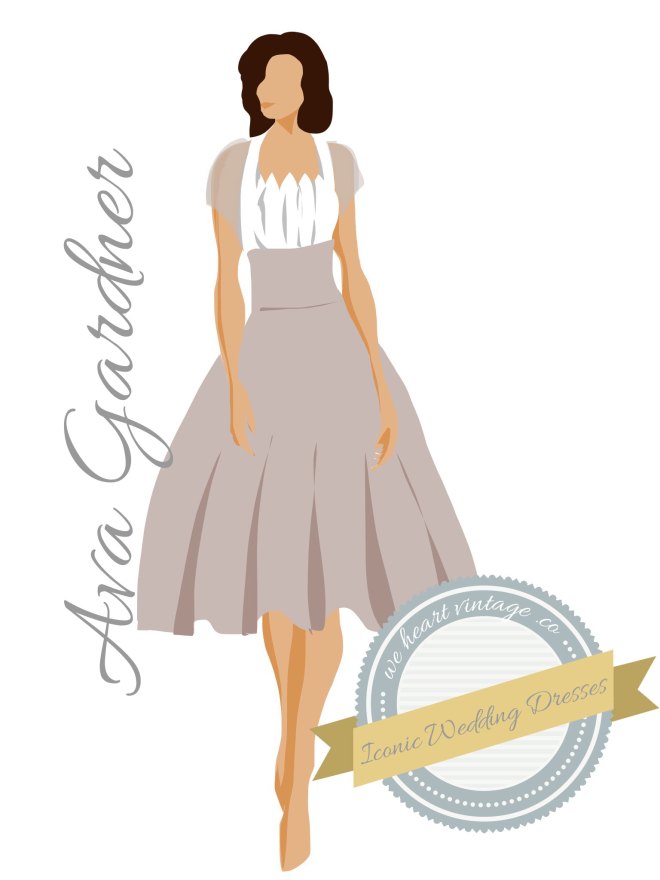 When Ava Gardner married Frank Sinatra after months of media speculation the world went wild. This was Gardner’s third marriage and she had long been branded a femme fatale by the press. Sinatra also came in for a lot of flack for leaving his wife Nancy for her, both by the Hollywood Establishment and the Roman Catholic Church.

Gardner and Sinatra’s relationship was tumultuous – apparently when he proposed she flung the six-carat diamond ring out of the window into the street – it was never found. The unfortunate bride also tripped and fell on her way up the aisle, leaving her ‘engulfed’ in her own wedding dress.

Despite the media attention that this wedding generated, it’s been hard to find out detailed information about the dress she wore.  I haven’t been able to find even a full-length photograph of the dress, so I have no idea what shoes she wore (although I’m quite sure it wasn’t bare feet the way I’ve drawn her!).

Her halterneck wedding dress was by Italian design house Fontana, who also designed costumes for Gardner for various movie roles including The Barefoot Contessa, The Sun Also Rises and On the Beach.

She wore the dress with a double strand of pearls and matching sheer shawl.